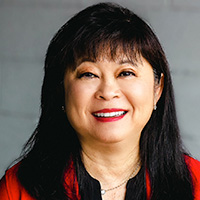 Theresa Motter was born to run an egg roll business. She immigrated with her family to the United States in the late 1960s from Vietnam. In 1975, the Nguyen family moved to the Dallas area, and in 1986 Theresa’s father launched VAN Oriental Food, a specialty egg roll vendor focused on creating quality products as well as job opportunities for its diverse community. Theresa was involved in the company from the beginning, contributing to its launch after she graduated from the University of North Texas with a degree in business.

Theresa is a second-generation CEO with a 34-year tenure at Van’s Kitchen. She has contributed greatly to the growth of the company, increasing the workforce from six to 95 employees and solidifying the brand’s presence in retail and convenience store channels.

Theresa’s impressive career includes holding every single non-production position, including CFO. She often jokes that the reason Van’s Kitchen is still in business is because she never made the egg rolls!

In the late 1980s, Theresa met her husband and business partner, Carl Motter, and together they built Van’s Kitchen into the successful producer of egg rolls it is today. They believe that all people are Made to Love, and everything they do (and every egg roll they make) is a representation of this. While the company is a major part of her life, Theresa maintains a balanced lifestyle by spending time with her two sons and participating in church and community activities.

Theresa believes that there is room at the table for everyone, whether it be the dinner table or the table of opportunity. This is why she plays an active role in various national food industry groups and local business associations, including Women’s Business Council Southwest, UNT Advisory Council for the Business School, Women’s Foodservice Forum, and other organizations dedicated to supporting women and minorities in business.