Food and beverage companies have been taking action to decrease their energy usage footprints in several ways. They can be active or passive in nature. For example, an active method is using waste products to generate biogas on site—or, passive, purchasing alternate energy, such as solar, thereby supporting new energy firms and their generation facilities, which use renewable energy sources instead of fossil-based fuels.

McCormick & Company and PepsiCo will be purchasing energy through Constellation, an Exelon company, which has agreed to purchase power and project-specific renewable energy certificates equal to a 140 MW section of the Big Star solar project, currently under development in Bastrop County, Texas. When finished in the second quarter of 2022, the solar facility will generate 200 MW or more.

Covered in FE, June 2019, Smithfield Foods had begun the construction of large biogas gathering systems on their farms in both Missouri and Utah. These systems use anaerobic digesters to collect methane gas from hog manure, which is then scrubbed clean and distributed into natural gas pipelines to supply communities with energy. 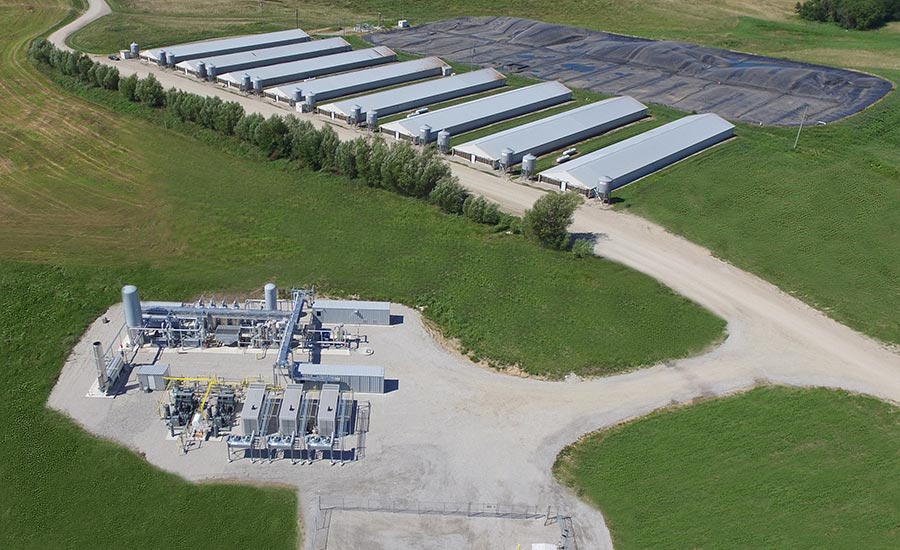 Aerial view of a Monarch Bioenergy manure to RNG facility shows the Snithfield hog barns with the methane collectors immediately behind. The facility in the foreground scrubs the gas and pressurizes it for entry into pipeline systems. Photo courtesy of Roeslein Alternative Energy

Solar energy gets a boost from Constellation

Constellation is both an energy and energy solutions provider, and the company announced that an agreement is in place to help PepsiCo and McCormick & Company power their operations with clean, renewable energy from RWE Renewables’ 200 MW Texas solar facility.

Major customer commitments resulted in Constellation’s agreement to purchase power and project-specific renewable energy certificates (RECs) equal to a 140 MW section of Big Star. PepsiCo, McCormick & Company and other major firms have signed an equivalent long-term agreement with Constellation to receive energy and RECs from the Big Star project as part of their retail electric supply contract.

“Sourcing renewable energy is a critical step in our journey to more than double our science-based climate goal: reducing GHG emissions by more than 40% by 2030 across our value chain and our pledge to achieve net-zero emissions by 2040,” says Ryan Spicer, senior manager of sustainability, PepsiCo. “We are excited to team with Constellation to power our operations with clean, renewable energy to help achieve our goals and be part of the solution by developing brand new sources of renewable energy.”

Smithfield and Roeslein Alternative Energy (RAE), working together as Monarch Bioenergy, are reseeding meadows near their projects, but RAE has a goal to reseed 30 million acres of prairie land in the Midwest that have been destroyed over time by poor farming practices. Not only will replanting prairie lands prevent runoff, it will also provide material for harvesting as biomass to create additional RNG. Photo courtesy of Roeslein Alternative Energy

Adding to that, Lawreunce Kurzius, president, chairman and CEO,  McCormick says, “McCormick is proud to be among the early supporters of the Big Star solar project, which highlights our commitment to reduce our impact on the environment by transitioning to clean, renewable energy sources. The Big Star project in Texas and the Skipjack initiative, which will power all of our existing Maryland and New Jersey facilities with 100% renewable energy by 2022, are already having a positive impact on our ability to reduce overall emissions and combat climate change.”

The Skipjack Solar Center, which is under construction in Virginia and expected to come on line by 2022, will provide renewable energy to power all of McCormick’s Maryland and New Jersey facilities, and according to Kurzius, McCormick will source energy from Skipjack through Constellation’s CORe (Constellation Offsite Renewables) retail power product. CORe increases Constellation customers’ access to new-build renewable energy projects by removing the significant hurdles associated with traditional offsite power purchase agreements (PPAs).

Reflecting on the deal between Constellation and RWE Renewables, Constellation CEO Jim McHugh, says, “This deal demonstrates the collective positive impact made possible by customers who share an authentic commitment to addressing climate change and reducing their respective carbon footprints. We take pride in providing a clean energy solution that helps leading companies such as these take proactive steps to meeting their environmental goals through renewable supply.”

“As one of the world’s leading renewable energy companies, we are committed to contributing to the energy transition and helping power the U.S. economy,” says Silvia Ortín, CEO, Onshore Wind and PV, RWE Renewables. “Our Big Star solar facility is well-placed to provide Constellation and its major commercial customers with a supply of green energy for their operations.”

Smithfield Foods and Roeslein Alternative Energy (RAE) are soon marking the 10 year anniversary of their joint venture, called Monarch Bioenergy, to implement renewable natural gas (RNG) technology on most of Smithfield’s company owned farms in Northern Missouri. They plan to have most implementations up and running before their ten-year anniversary.

The technology captures methane emissions and converts them into carbon-negative RNG to power homes, vehicles and businesses.

“As one of the world’s leading renewable energy companies, we are committed to contributing to the energy transition and helping power the U.S. economy.”

Construction of the approximately $150 million project officially began in 2014, three years after RAE and Smithfield first had the idea to embark on the joint venture. The proprietary processes that emerged from the project create carbon-negative RNG at a rate of approximately 800,000 dekatherms annually. A dekatherm is a unit of energy that is equal to one million British thermal units or 10 therms. Dekatherms measure the actual heating value of a specific volume of natural gas.

“We are delighted to reach this exciting milestone, which is a significant step toward fulfilling our commitment to implement this transformative, cutting-edge technology on the vast majority of our finishing farms in multiple states,” says Kraig Westerbeek, vice president of Smithfield Renewables for Smithfield Foods. “Our Monarch Bioenergy manure-to-energy projects are making a significant environmental impact, and remove 25 times more emissions from the atmosphere than are emitted during the clean energy’s end use. Because of this, they are key projects in our Smithfield Renewables portfolio of innovative renewable energy and carbon reduction efforts across our operations.”

In addition to generating renewable energy, Monarch Bioenergy has planted hundreds of acres of prairie grass, providing ecological services and wildlife habitat across the state. Beyond the ecological aspect of regenerating prairies that have been damaged by poor farming practices, Monarch is also exploring harvesting prairie plants to create biomass for RNG production—a win-win for saving the prairie and using it to create energy as well.

Both RAE and Smithfield have been looking at the prospect of additional manure-to-energy projects in Arizona, California, Colorado, Iowa, North Carolina, Texas, Utah and Virginia.