EPA has effectively indicated there is no safe measurable level of PFAS residues in drinking water—and FDA reports PFAS in imported seafood.

Since FE covered the family of PFAS (per- and polyfluoroalkyl substances) in drinking water and food in the September 2021 issue, EPA has acknowledged that the previous 2016 Health Advisory (HA) allowable minimum reporting level (MRL) of 70 parts per trillion (ppt) in drinking water for PFOA/PFOS is dangerously too high and is now recommending much lower levels—levels that challenge analytical instrumentation. And without testing, there is no assurance that food and beverage products or drinking water is free of these chemicals.

Nevertheless, it’s important to note that there are hundreds of chemicals and materials in the PFAS family, and not all pose environmental problems and health concerns, according to a recent study from the American Chemistry Council.1

Currently there are six PFAS chemicals (PFOA, PFOS, PFNA, PFHxS, HFPO-DA [GenX], and PFBS) from environmental contamination for which the FDA can assess the potential human health concern for levels found in food. At this time, however, there are no other appropriate toxicological reference values for the other types of PFAS that FDA may discover in subsequent testing.

Testing methods for PFAS are expanding. For example, Eurofins Environment Testing Labs in Sacramento and Lancaster, Pa., have just received accreditation for Draft EPA Method 1633 for the U.S. Department of Defense for 40 PFAS compounds for water, solids and tissue matrices.

In recent FDA testing reported since last year’s FE news story, an assortment of foods (including vegetables, fruits, poultry and dairy) in the U.S. were tested for PFAS contamination with the only foods having issues being tilapia, cod and shrimp. Seafood—especially imported—has had ongoing problems with PFAS contamination, and FDA is working with suppliers on these issues. Both carbonated and non-carbonated waters have had generally no problems. If residual levels are found in local water intended for ingredients, beverage companies typically filter any PFAS compounds out before any mixing or processing begins.

Where ground waters and/or soils have been contaminated, some supplier and engineering companies have developed treatment solutions, which make the “forever chemicals” no longer forever. (See the last section of this article.)

EPA Off to a Good Start

As mentioned in the FE 2021 update, PFAS resist decomposition in the environment and in humans, and they have been suspected of causing some cancers—e.g., kidney, liver, testes and other immune and thyroid effects in heavily exposed subjects.

Since PFAS chemicals have been found in the soil, water and atmosphere, EPA announced a PFAS Strategic Roadmap in October 2021, which outlines EPA’s commitments to action from 2021 through 2024. The roadmap lays out EPA’s whole-of-agency approach to tackling PFAS, sets timelines for concrete actions from 2021 to 2024, fills a critical gap in federal leadership and supports states’ ongoing remediation efforts by providing funds to clean up PFAS contaminated sites.

EPA has developed health advisories (HAs) for about 200 drinking water contaminants, with PFAS being a major concern. Though HAs are non-enforceable and non-regulatory, they provide utilities and food/beverage processors with valuable information on analytical methods and treatment.

EPA has created interim HAs for PFOA and PFOS, and are based on publicly available EPA drafts undergoing an EPA Science Advisory Board (SAB) study to provide information to public health officials while regulatory process is ongoing.

The new HAs address the pressing need to replace 2016 PFOA/PFOS HAs of 70 ppt—based on more recent health effects studies showing that PFOAs can affect human health at much lower levels than listed in the 2016 HAs. Toxicity values will change as a result of work to address the SAB recommendations. But the HAs (and maximum contaminant level goals (MCLGs)) are likely to remain below the PFOA and PFOS minimum reporting limit of 4 ppt. Final HAs for PFBS and GenX chemicals are based on publicly available, and peer-reviewed final toxicity assessments published in 2021. 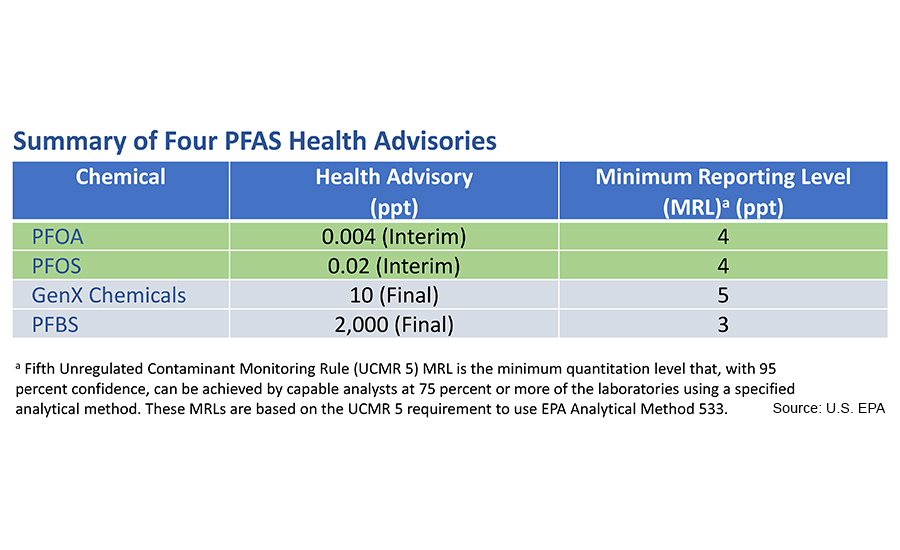 Note that in EPA’s “Summary of Four PFAS Advisories,” GenX chemicals refer to a PFOA replacement and PFBS refers to a PFOS replacement. Currently, analytical test equipment can detect GenX chemicals and PFBS at the HA values but cannot detect PFOA and PFOS at the level of the interim HAs.p;

FDA Analytical Results for PFAS in 2022 Total Diet Sampling (parts per trillion)—Dataset 5 reveals that only tilapia (PFOS detected at 28 ppt) and shrimp (PFOS at 216 ppt) were above the (method detection limit) MDL of 28 ppt and cod (PFDA at 23 ppt and PFNA at 87 ppt). MDL is defined as the minimum concentration of a substance that can be measured and reported with 99% confidence that the analyte concentration is greater than zero.

In targeted testing for PFAS in seafood, FDA took samples from eight types of seafood, primarily imported. Analyzed for PFAS were fresh, frozen, processed, canned and seafood in pouches collected at retail locations in the Washington, D.C., metropolitan area as well as purchased online. To inform the collection of seafood samples, FDA identified the countries of origin from which the greatest share of the market is imported by the U.S. Sampling also took into account whether the seafood typically consumed are either wild caught or raised via aquaculture. Sixty of the samples had detectable levels of PFAS, with most samples having more than one type of PFAS detected. FDA determined that of the PFAS evaluated, the levels of PFOA in 10 clam samples are likely a health concern. The FDA is working to determine the scope of the problem and taking action to ensure the continued safety of the U.S. food supply.2

Seafood remains a tricky problem, and recent lab tests on oysters obtained off the Florida coast by researchers from Florida International University (FIU) show a disturbing trend. FIU’s Institute of Environment sampled 156 oysters from Biscayne Bay, Marco Island and Tampa Bay, and tests detected contaminants—perfluoroalkyl and polyfluoroalkyl (PFAS) and phthalate esters (PAEs)—in every single one. These contaminants pose serious health risks to people and wildlife, and the oysters prove PFAS are in the water and have crept into the food chain. The findings were recently published in Science of the Total Environment, and PFAS concentration ranged from 0.6111 to 135 ppt.3

“I wanted to look into what we’re eating and if it might be contaminating us,” says Leila Lemos, the study’s lead author and an FIU distinguished postdoctoral scholar. “These findings are definitely a red flag, especially for areas like Biscayne Bay.”

Biscayne Bay oysters had the highest concentrations of contaminants compared to the other study sites. Lemos says this was somewhat surprising since they were among the smallest oysters sampled. The more time an oyster has to grow, the more time it also has to accumulate toxic chemicals. Tampa Bay oysters were among the largest in the study, but they didn’t have nearly the amount of PFAS or PAEs as the smaller Biscayne Bay oysters. This means Biscayne Bay could be so contaminated—the oysters are bombarded with such high concentrations—that they accumulate contaminants more quickly, says Lemos.

Lemos says a strong correlation between the amount of PFAS in the water and an oyster’s shell thickness and weight was found. The oysters with the highest concentrations of contaminants had the thinnest shells. The number of contaminants in the area could impair oyster development—which raises concerns for how chemical contaminants could threaten oyster farming in other parts of the country.

The study also assessed the human health risk of consuming oysters. In this study, the Tampa Bay oysters originated from an oyster farm, so Lemos looked at those samples. The good news is the health risk is low. However, Lemos points out current assessments only include four PFAS and four PAEs compounds—and don’t look at the majority of compounds. The assessment also does not look at the risks of consuming other marine life that may live the same waters with the oysters with high contamination.

“It’s important to also remember that there’s so many other exposure paths for both PFAS and PAEs compounds, like drinking water,” says Lemos.

PFAS can, of course, be filtered out of water, but the resulting filtrate contains PFAS—which is still capable of contamination. Some innovative companies have found methods literally to destroy PFAS in ground water. For example, Battelle’s PFAS ANNIHILATOR destroys PFAS by using super-critical water oxidation (SCWO), a process that results in breaking the carbon-fluorine bond that makes them so durable. The engineering company’s onsite destruction capabilities are designed to eliminate PFAS at the source of contamination before they get to drinking water supplies. The PFAS ANNHILATOR is a scalable technology that is able to be mobile, portable or fixed in terms of operating scenarios. Battelle anticipates that at least four units will be in operation by June 2023. The company also provides PFAS laboratory analysis and is approved for EPA Method 533 and EPA Method 537.1, both drinking water methods on the EPA’s Unregulated Contaminant Monitoring Rule 5.

Founded by Julie Bliss Mullen, CEO, an upstart water treatment company, Aclarity, has come up with a proprietary onsite electrochemical process that permanently destroys PFAS and other harmful chemicals instead of returning them back into the environment. This treatment method replaces standard PFAS disposal methods such as capturing for incineration, deep-well injection, and sending to landfill.

Yet another company working to eliminate PFAS from contaminated water, Claros Technologies announced its strategic partnership with Kureha America Inc., a wholly owned subsidiary of Kureha Corporation Japan, to scale up a state-of-the-art technology that is capable of capturing, concentrating and destroying PFAS from wastewater. The comprehensive solution is able to capture and concentrate PFAS chemicals, then permanently break their carbon-fluorine bonds into safe, naturally occurring elements. Kureha will collaborate with Claros to develop a commercially feasible system and install the system for Asian markets.

“Our approach is to concentrate PFAS from millions of gallons of wastewater into a few gallons of PFAS concentrate that can be cost effectively and permanently destroyed in a traceable fashion. It works on a variety of industry wastewater and even on firefighting foam,” says Dr. Abdennour Abbas, Claros founder and CTO. “Changing the way we treat our chemical waste by adopting a closed-loop system will not only reduce risks for the public and the environment but also eliminate latent and future liabilities for manufacturers and waste disposal companies.”