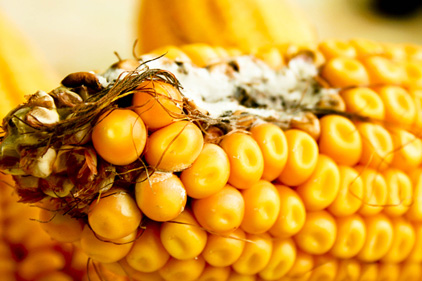 While there’s plenty of apprehension about the depleting grain harvest, many livestock producers are also concerned about the potential for an unsafe feed supply this year due to the drought. Extreme temperatures and the additional stress on plant growth have put this year’s crops at risk for increased nitrate levels as well as mold and mycotoxin problems, according to Dr. Swamy Haladi, member of Alltech’s mycotoxins management team.

Mycotoxins, harmful toxins produced by molds, can create a variety of health problems for animals depending on the animal species and the type of toxin. For instance, swine have a higher sensitivity to contaminated feed, so feed avoidance is a common symptom of mycotoxicoses in these animals. In poultry, egg shell quality, feed efficiency and immunity are affected. Ruminant animals can bear relatively higher mycotoxin challenges, but are not resistant as some people may think. For example, many mycotoxins have been shown to compromise milk production, reproduction and immunity, especially in high-yielding cows, says Haladi.

According to Haladi, this year’s drought can promote several different types of mycotoxins. Aspergillus and some of the Fusarium molds such as Fusarium verticilloides and Fusarium proliferatum will be the most prevalent. The drought can lead to production of aflatoxins and fumonisins in addition to routine incidences of vomitoxin (DON) and zearalenone in US and Canadian feedstuffs. Silages will have even bigger challenges.

“Silage that is too dry, less than 65 percent moisture, will not pack well,” says Haladi. “This situation can increase the chances of Penicillum molds appearing in our silage. As a result, we can expect several silage-specific mycotoxins in addition to the field mycotoxins mentioned above. These silage-borne mycotoxins can act as antibiotics and kill beneficial microbes in the rumen. The net result is lowered productivity and metabolic disorders.”

To identify more of the risks associated with mycotoxins, Alltech recently launched its 37+ Program. The mass spectrometry technique (LC-MS2) can investigate 38 different mycotoxins quantitatively, and more than 50 others qualitatively, in less than 15 minutes with limits of detection in the parts per quadrillion range.

“This approach allows us to have a broader analytical approach compared to the other commercial methods that can only see a ‘snapshot’ of contamination,” says Haladi. “Additionally, a proper understanding of the mycotoxin challenge allows implementation of integrated mycotoxin management programs and technologies in a timely manner.”