A look inside the 600,000-square-foot structure offers a glimpse into the future of case-ready meat plants.

Case-ready meats are primal cuts of protein that are portioned, sliced and packaged into retail-ready trays of steaks, roasts, chops, cutlets, ground meat and more. This refrigerated segment requires no further processing at the store-level—where many outlets are experiencing labor challenges behind the meat counter—and continues to see substantial year-over-year growth, since the product fits well into time-crunched consumer meal times.

“Research continues to show that convenience is paramount for consumers today. We have seen increases in trial of meal kits, seasoned and marinated meats, and additional value-add innovation products, all of which come from our case-ready plants,” says Nate Hodne, SVP fresh meats, value add & case ready, Tyson Foods. “The category is showing no signs of slowing down, and we believe case-ready products are a key element in the future of fresh meats.”

Tyson is one of the giants in the case-ready category, and their Fresh Meats business recently opened its fifth case-ready facility, focused on beef and pork in Eagle Mountain, Utah. The $300 million plant opened last August, and is one of the largest of its kind in the country, built on an 80-acre site, spanning 600,000 square feet, and employing up to 1,200 workers at full capacity, with the biggest processing room onsite over two acres in size. Those at Tyson say the impetus to build the Eagle Mountain facility was to address growing demand for case-ready meats in the western U.S.

This facility goes far beyond size though. Within its walls is one of the most technically advanced food processing plants in the country—a greenfield project built from the ground up with automation, labor savings, sustainability and smart design throughout. These leading-edge advancements earned Tyson our Plant of the Year Tier 2 award (for an overall investment between $150 million and $349 million) and here, we take a look inside at some of the key innovations. 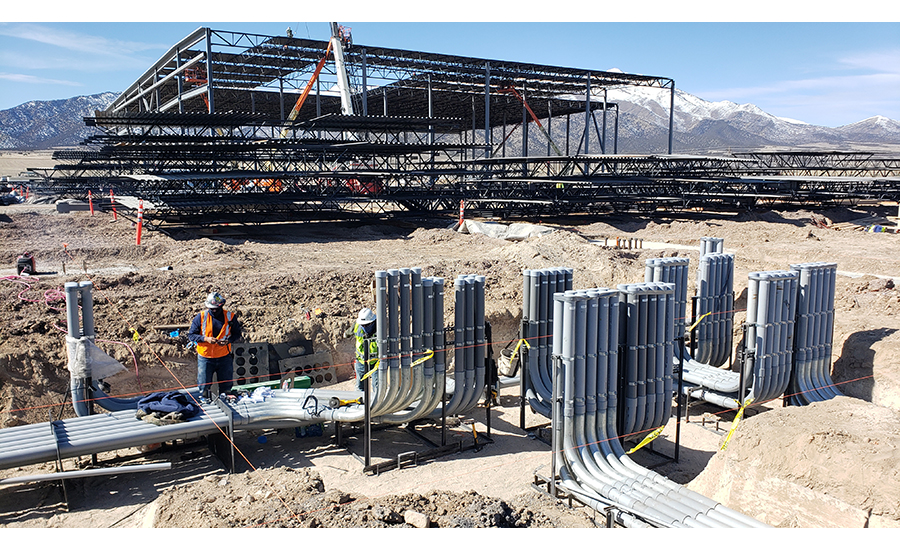 Construction crews used GPS to accurately place this underground conduit for an electric room in the plant. Photo courtesy of Tyson Foods 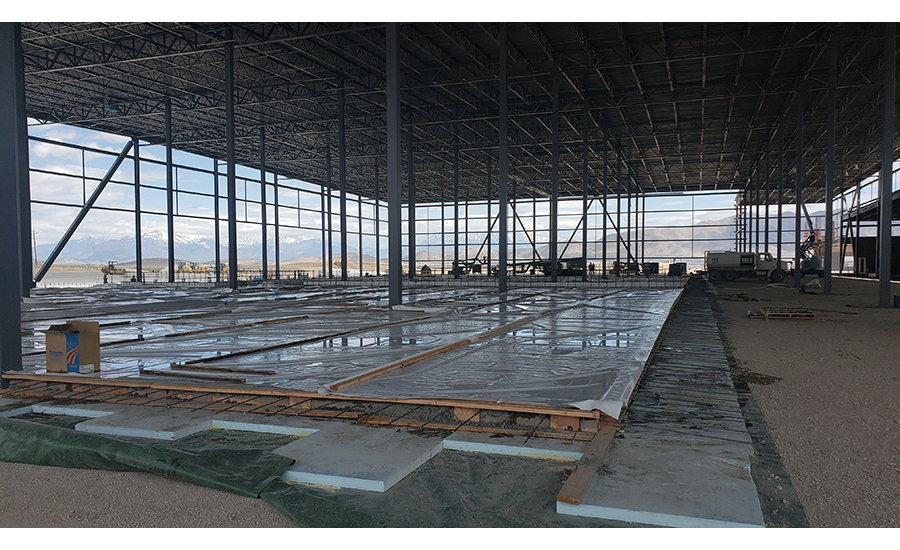 Concrete crews started their shift at midnight to avoid high winds during the day, and interfering with other trades working onsite in the daytime. Photo courtesy of Tyson Foods 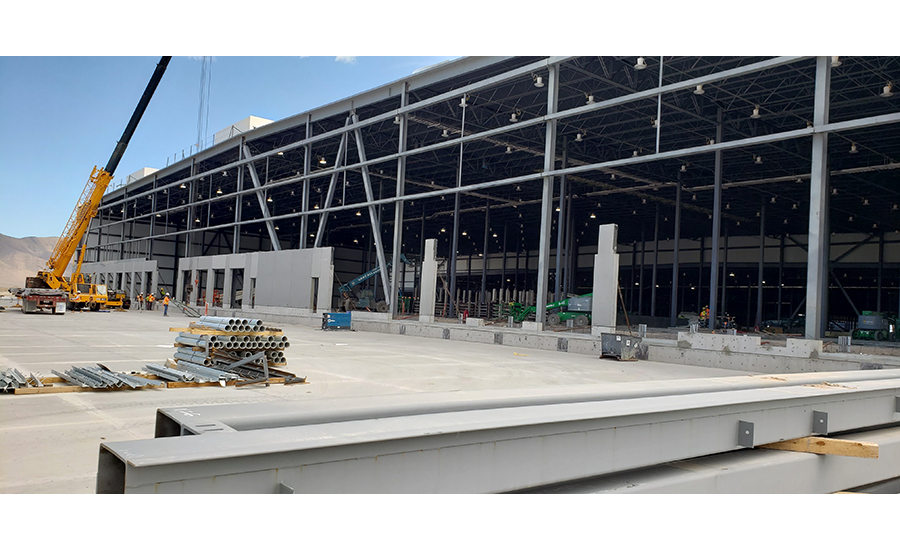 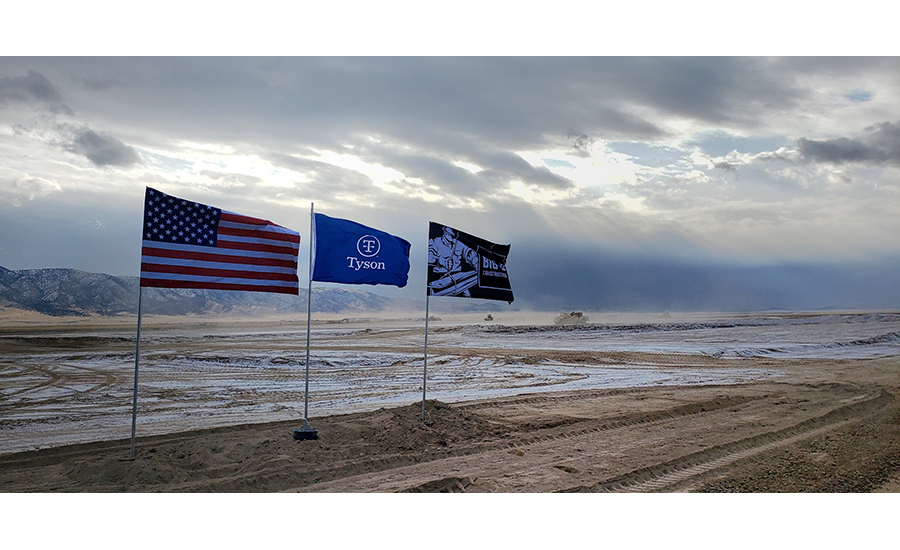 “Our teams looked at every aspect of the facility to identify opportunities to implement automation and technology, along with more sustainable alternatives to what is present in our existing case-ready plants,” says Hodne. “The Eagle Mountain plant allows us to test, refine and perfect ideas and operational systems, and then take those findings and re-invest in our other case ready facilities across the country.”

A major focus for Tyson was maximizing automation to create greater efficiencies, and also remove as many difficult manual and heavy lifting positions as possible. This in turn, opened up opportunities for workers to utilize a higher level of skill in other areas at the plant. Overall, automation and other streamlining factors in the facility have reduced traditional labor needs by 22% compared to similar plants.

One example is the arrival of raw, primal cuts of beef and pork to the facility, which are harvested and fabricated at other Tyson plants and shipped to Eagle Mountain. That meat comes in large, heavy-duty cardboard containers that need to be opened, with the product removed and transported to the processing sector. The empty cardboard boxes are then broken down and moved to a recycling area.

Tyson co-developed a robot just for this task that takes human labor out of the equation. According to the company, their robot opens the boxes, removes the contents, and places the product into a reusable container, which is transferred by forklift or conveyor for processing. The robot then moves the empty cardboard boxes to a conveyor, taking them to a cardboard baler at the facility, and eventually sent to a recycler.

The same labor-saving idea is incorporated into the facility’s automated palletizing system, which eliminates the need for employees to move heavy boxes and totes by hand, while creating better freight/space utilization.

Processing meat is another highly automated area at Eagle Mountain. Newly designed tenderization equipment for beef cubes and pork cutlets reduces the need for hand tenderization while improving the overall safety for staff working in that area.

A radial multi-head weigher was also installed for diced and portioned meats. Those at Tyson say this allows for maximized tray weights and labor reductions while improving ergonomics since product is placed into trays automatically.

Smart slicers have been incorporated using vision technology, which can scan and analyze cuts like a ribeye, for example, for optimal yields with minimal waste, while reducing the need for team members to make those cutting decisions. Line efficiency is also improved since meat is automatically loaded into the slicer, with the finished product landing directly into a tray.

Multiple product sortation tools were installed at the tail end of each smart slicer, giving the plant greater control over how individual cuts are distributed to the line. For trimmings left over from product slicing, a special x-ray system is used to analyze those trimmings to determine the meat-to-fat ratio, which reduces waste and further optimizes yields and throughput.

Flexibility was also implemented into the facility’s state-of-the-art ground beef grinding system, which was designed to be used with additional species like pork and poultry, and processed without contamination of the main system. “Our ground beef product dumpers were also designed to break away and reduce the potential for foreign object contamination,” notes Hodne, who adds that all process workstations and tables are on wheels to provide layout flexibility.

Greater efficiencies are also realized at Eagle Mountain through an array of cutting-edge packaging equipment and strategies. “A new product-identification system was developed in collaboration with a cross-functional team from multiple departments within Tyson to identify products prior to retail labeling,” Hodne explains. “This technology saves on team members’ time, labels, tray storage and any relabeling needs.”

More labor is saved through a semi-automatic packaging process, which those at Tyson say is a more advanced method than previous versions to package and handle their products, and reduces the amount of packaging material needed as well. New high-speed tray padding machines were also installed to operate more efficiently than traditional tray padding equipment.

Dual-overlap machines are also used at the end of the slicing lines “which allows increased capacity by eliminating the bottleneck in the wrapping process and allowing for future packaging flexibility. All wrappers will have film perforators to reduce packaging costs,” Hodne says. More bottlenecks were reduced through the use of high-speed weigh price labelers, which use the Tyson vision-based identification system. 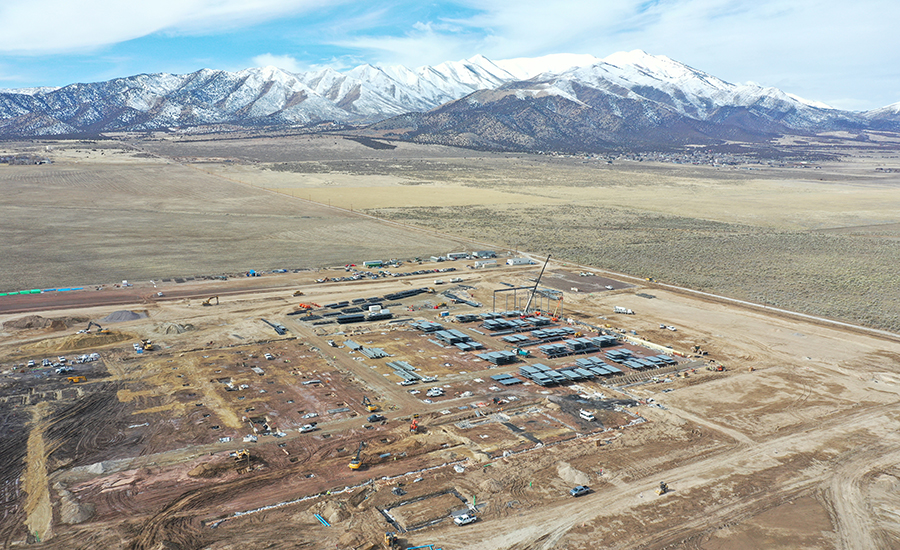 Steel columns being set in February 2020, along with pre-kitted roof sections to help speed up assembly. Photo courtesy of Tyson Foods 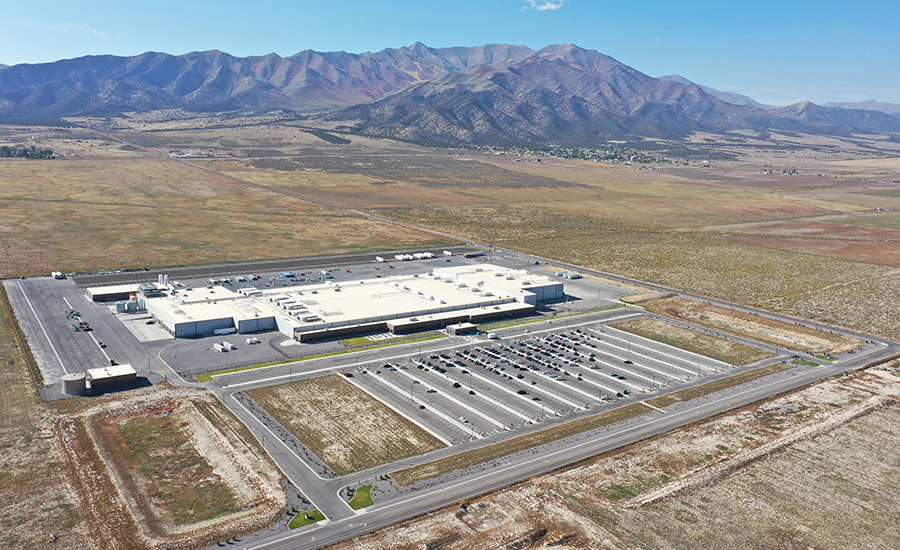 Newly designed master bag machines were also installed on all lines to improve labor, packaging cost, ergonomics and safety over traditional machines. To move packaged products along in the facility, Tyson installed modular plastic belting spiral conveyors to reduce maintenance costs and foreign object potential compared to conventional slat type or incline conveyors. Additional belt lifters were also added throughout to improve conveyor cleaning, while an overhead conveyor loop was installed to allow for SKU balancing and to create a buffer during downtime.

To help quantify production and meet goals, a brand-new MES system was developed to provide real-time feedback on yield and labor utilization throughout the plant. “Multiple pieces of equipment such as inline scales and cameras were installed to identify and track important metrics,” explains Hodne. “This allows the business to remain nimble and quickly pivot to help make educated business decisions based on real-time data from the field. There are TV displays for each line in the processing areas that display this information, allowing team members important insight into their operations.”

Vision for the Future

Hodne says pre-project, Tyson put a wish list together for everything they wanted in the Eagle Mountain facility. Among the primary topics addressed were:

All of the areas above were successfully implemented into the project. Some of the operational innovations were detailed earlier, but for sustainability, new features include a specially designed low-charge ammonia-based refrigeration system that reduced the amount of ammonia used by 50%; a split raw cooler design for easier cleaning and raw storage (eliminating the need for raw storage trailers); all-LED lighting throughout the facility; and custom trench drain designs that reduce water consumption for sanitation. A special conveyor was created by Tyson as well to remove organic solids from the wastewater stream, and the company also designed new water utility pumps and piping to minimize overall water usage at the plant.

For employee safety, some of the highlights include motion sensors for doors; safety lights and color coding to notify staff of oncoming vehicle traffic; non-slip floors and drains; a minimal number of stairs in the building; an ergonomic layout for production and six-feet of space between workers at stations; condensation curtains and ventilation fans to reduce ice build-up; smart bandsaws that that stop rotating if someone is too close to the blade; and in the parking lot, raised sidewalks between rows to keep team members out of the flow of traffic.

Perhaps the most future-forward option at Eagle Mountain was to design the building with an extra 300,000 square feet of space to accommodate future expansion to keep pace with the anticipated growth of the case-ready meat category. For now though, the current facility is more than enough to handle current demand, and is a standard-setting example for the rest of the company regarding operational efficiency and an employee-first environment.

“After the first eight months of operating our new plant, the results have been positive and well-received,” says Hodne. “The Eagle Mountain facility and its forward-thinking innovation are proving what Tyson expected and helping to deliver on the company’s commitment to feed the world.”

Michael Costa is the Former Editor-in-Chief of Food Engineering, and the former Editor-in-Chief of Refrigerated & Frozen Foods. Previously, he was Editorial Director of Hotel F&B magazine for 12 years, covering the business of food and beverage in lodging, including restaurants, bars, catering and more, for readers working in hotels, casinos and cruise ships. During his time at Hotel F&B, he guided the publication to six FOLIO: magazine Eddie awards. Before joining Hotel F&B in 2007, Michael attended culinary school at the Illinois Institute of Art while working in the kitchen and in F&B purchasing at the 1,218-room Sheraton Grand Chicago. Prior to that, he worked for six years in TV news as a reporter at network affiliates around the country. Michael is a journalism graduate of Columbia College in Chicago.