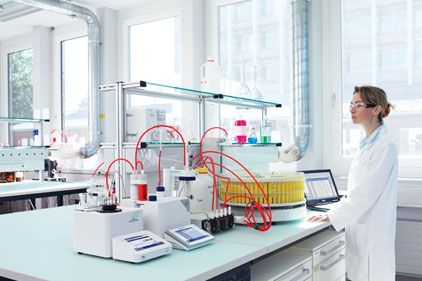 The USDA’s National Institute of Food and Agriculture issued a grant to a research team at the University of Massachusetts Amherst to improve food safety by developing faster methods for detecting and separating microbial contamination from food.

The team, led by food scientist Sam Nugen, received nearly $500,000 for the project.

According to the university, Nugen and his team are designing techniques to help food manufacturers cut down on the time it takes to perform safety tests before products can be sold. The university says this is especially significant since aspects of the Food Safety Modernization Act may shift the way FDA focuses on food contamination by engaging more preventative measures.

"The current method of testing a batch of chocolate pudding, for example, means collecting a sample, sending it to a lab where a broth is prepared and any bacteria found are plated and grown,” says Nugen. “It can take several days to a week before they're identified. Meanwhile, the company has to warehouse its pudding during the testing period. We're working on separating bacteria from a food sample much more quickly, in minutes, so technologies that already exist for testing a clean sample can be used. It should break the bottleneck in the system and save considerable time and expense."

Nugen said techniques like this will help products like fruit which have a tight timeline on freshness and cannot be held for tests which will cost time and money.

To remove bacteria from liquids, the team designed beads made of magnetically charged cobalt nanoparticles that were paired with viruses used to attract specific bacteria. The beads are then removed from the liquid with a magnet.

The methods have been shown to work in liquids not related to food and the grant will now allow them to proceed with actual food samples.The team is working on a method to detect disease causing microbes in dry food as well.