Health professionals push for reduction of sodium in diets 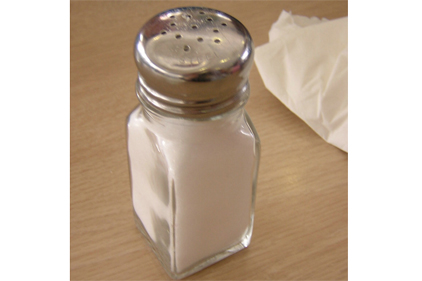 Citing a need to lower blood pressure and prevent death from heart disease, health officials and government representatives are gearing up to reduce the high levels of sodium in US consumers’ diets.

To guide consumers, The Million Hearts initiative, co-led by CDC and the Centers for Medicare and Medicaid Services, launched a new Healthy Eating and Lifestyle Resource Center. The resource contains lower-sodium, heart healthy recipes and family friendly meal plans with what organizers say will have and emphasis on managing sodium intake.

“Because sodium is a major contributor to high blood pressure, it is important to help people understand how they can manage sodium intake at home,” says Janet Wright, executive director of Million Hearts. “This online resource offers practical, accessible eating and lifestyle-based solutions for people looking for ways to reduce sodium in their diet and create heart-healthy, tasty meals for themselves and their families.

Last week, the Associated Press reported FDA Commissioner Margaret Hamburg said sodium is of a “huge interest and concern” to the agency which has plans to soon establish federal guidelines on ways to reduce the level of sodium in foods.

According to Million Hearts, one in four deaths in the US is attributed to heart disease.

In May, the American Heart Association released a report detailing the complex issue of reducing sodium, but stated that the success of new technological approaches to reducing sodium “will depend on product availability, health effects (both intended and unintended), research and development investments, quality and taste of reformulated foods, supply chain management, operational modifications, consumer acceptance, and cost.”

FDA urges consumers to check the label before eating and look for the percentage of daily value of sodium an item contains. Based on a diet of less than 2400 milligrams of sodium per day, FDA says foods with 120mg or less of sodium per serving is low while 240 mg or more is high.

All recipes in the Million Hearts web resource will feature nutritional information, representatives say. Search and filter options will allow users to find meals based on prep time, cuisine, course and serving size.

"This resource helps people see that it’s not about giving up the food you love, but choosing lower sodium options that taste great," said Dr. Tom Frieden, director of the CDC.  “Small changes can make a big difference.  We can prevent 11 million cases of high blood pressure each year if everyone reduced their daily sodium intake to 2,300 mg.”