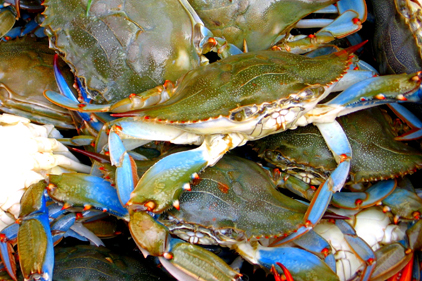 That iconic Chesapeake Bay blue crab you ordered at a local Maryland or Washington, DC restaurant just might not be the real thing according to a recent study from Oceana that suggests a massive mislabeling scam.

According to the environmental activist organization, DNA testing of crab cakes taken from 86 restaurants in the Chesapeake Bay area confirmed 38 percent of the products were mislabeled. Instead of the advertised locally caught blue crab, Oceana says the crab cakes contained imported substitutes. The crab cakes were considered to be mislabeled if they were described on the menu or confirmed by the server as containing blue crab or as sourced from Maryland or the Chesapeake Bay region, but were comprised of completely different crab species.

“When diners purchase a Maryland crab cake, they don’t expect to get an imported substitute,” said Beth Lowell, senior campaign director at Oceana. “This type of fraud, species substitution, inflates the price for consumers, parades imported and sometimes illegally caught crab as local, prevents consumers from making sustainable seafood choices, and harms the livelihoods of local watermen and seafood businesses.”

In all, Oceana found eight species other than blue crab present in crab cakes purchased in the Chesapeake Bay region. According to the study, while the organization attempted to only purchase local blue crab, 48 percent of the crab cakes tested used species from the Indo-Pacific region (44 percent) and the Mexican Pacific coast (4 percent).

In March, the Obama Administration announced a plan of action to end illegal fishing and fraud by launching a fish tracking program that would make more information—like point of origin and means of production—available to consumers.

The plan seeks to implement steps issued by a task force last year that will include “measures to create and expand domestic partnerships to detect black market fishing and seafood fraud, strengthen enforcement, and develop a traceability program to track seafood from harvest to entry into U.S. commerce, beginning with the species most at risk for trafficking,” according to Brian Deese, senior advisor to the president and Christy Goldfuss, leader of the White House Council on Environmental Quality.

The full Oceana report with key findings can be viewed here.