This website requires certain cookies to work and uses other cookies to help you have the best experience. By visiting this website, certain cookies have already been set, which you may delete and block. By closing this message or continuing to use our site, you agree to the use of cookies. Visit our updated privacy and cookie policy to learn more.
Home » Inorganic arsenic in baby food: Getting to the “root” of the problem
Manufacturing News
Manufacturing News

The FDA has recently taken the heat from the U.S. House of Representatives, which released a report finding several baby food companies to have high toxic levels of heavy metals in their products. The Congressional report entitled, “Baby Foods Are Tainted with Dangerous Levels of Arsenic, Lead, Cadmium, and Mercury,” was released on February 4, 2021.

Of course, any amount of heavy metals in our—and especially our babies’ and children’s—food is too much. Nevertheless, when pressed a few years ago to come up with a maximum allowable residue of inorganic arsenic in apple juice, the FDA adopted the EPA’s rule on drinking water of 10 ppb. (See “FDA proposes new “action level” for arsenic in apple juice,” FE, July 30, 2013.)

Yet, according to the Congressional Report, “in the category of baby food for which the FDA has finalized a standard—infant rice cereal—it set the maximum inorganic arsenic content at the dangerous level of 100 ppb.” Why so high? The report suggests that when developing the limit, FDA was focused on the level of inorganic arsenic that would cause cancer. FDA disregarded the risk of neurological damage, which happens at a much lower level, says the report.

Why the difference? The Congressional Report suggests that FDA’s piecemeal approach of setting different inorganic arsenic standards for different products is logically unsound. There can only be one safe level for inorganic arsenic in the foods babies consume. All finished baby food products should be in accordance with this safe level.

In FDA’s rebuttal to the Congressional report, FDA said: “Because these [toxic] elements occur in the environment, currently they cannot be completely avoided in the fruits, vegetables or grains that are the basis for baby foods, juices and infant cereals made by companies or by consumers who make their own foods.”

Organic doesn’t solve the problem either, says FDA. “They [toxic metals] also cannot be completely avoided by using organic farming practices. Our goal is to reduce exposure to toxic elements in foods to the greatest extent feasible and to further advance progress in this area through more research and enhanced collaboration among stakeholders.”


What toxins were cited in the Congressional report?

Another company’s baby food ingredients tested as high as 913 ppb of arsenic while additives typically used tested as high as 300 ppb. Another brand used high-level arsenic ingredients, where 67 batches of rice flour yielded test levels over 90 ppb of inorganic arsenic.

According to the Congressional study, these results are multiples higher than allowed under existing regulations for other products. For example, FDA has set the maximum allowable levels in bottled water at 10 ppb inorganic arsenic, 5 ppb lead and 5 ppb cadmium, and EPA has capped the allowable level of mercury in drinking water at 2 ppb. The test results of baby foods and their ingredients eclipse those levels: including results up to 91 times the arsenic level, up to 177 times the lead level, up to 69 times the cadmium level and up to 5 times the mercury level.

See the table below: This is a partial list of ingredients from one baby food manufacturer, which shows several ingredients well above the FDA accepted level of 100 ppm for inorganic arsenic in a finished product. Of course, the finished product would not likely have levels this high, but certainly these ingredients could contribute to a finished product where levels are over 100 ppb. Source: U.S. House of Representatives study: “Baby Foods Are Tainted with Dangerous Levels of Arsenic, Lead, Cadmium, and Mercury,” 02-2021 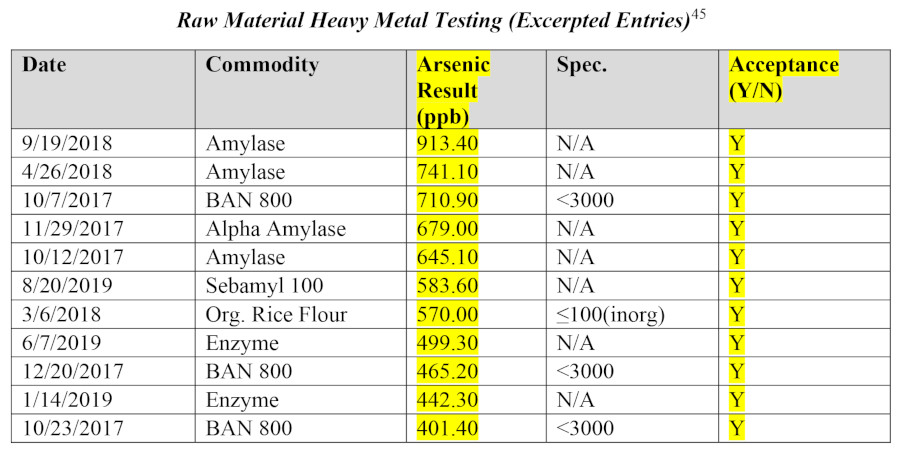 Fixing the problem by changing ingredients

While phasing out certain ingredients may sound like a simple solution, for those manufacturers with long-standing, well-known products, finding either the same ingredients grown differently such that they contain no (or safe, low levels of) heavy metals—or changing the recipe could mean creating an entirely new recipe/product altogether, which is not necessarily an easy task for a well-established product.

One new company that has gone through this process is Else Nutrition, which makes use of a preprocess and ingredients that are not so prone to toxic heavy metals. The novel preprocess was under development for nearly a year. A full pilot stage was successfully completed and tested recently at the company’s innovation center, positively demonstrating reduction of specific element levels.

Else Nutrition is primarily made of almonds, tapioca and buckwheat: three core ingredients that go through a clean, all-natural process that provides the protein, carbohydrates and fat directly from the whole plants, along with phytonutrients, fiber, vitamins and minerals nature intended to provide optimal nourishment for children. Else is free of dairy, soy and corn-syrup, and is made with non-GMO ingredients. It is made using a clean, most natural and sustainable industry process.

As shown with cacao plants in an FE online story November 9, 2020, changing farming practices can change uptake of toxic heavy metals such as cadmium, but this isn’t always an easy task. For example, cacao trees will not take up as much cadmium from their roots when their soil is treated with lime. Only problem is: How does a low-income farmer successfully apply lime to the soil such that the deep subsurface roots can absorb it in some of the terrain in which these trees are grown.

Rice flour from rice is also problematic when it comes to arsenic uptake. Angelia Seyfferth, a member of the Soil Science Society of America and associate professor of Biogeochemistry and Plant-Soil Interactions at the University of Delaware Department of Plant and Soil Sciences, investigates food contamination coming from the soil where the plants grow. “It all comes down to the chemistry of the soil,” explains Seyfferth.”

Most recently, Seyfferth has been studying rice. The elements arsenic and cadmium can be present in the paddies where rice is grown. She presented her research at the virtual 2020 ASA-CSSA-SSSA Annual Meeting.

“Contaminants being taken up by crop plants is a route of dietary exposure to contaminants that is understudied,” says Seyfferth. “We can help decrease human exposure to toxins by applying our knowledge of soil chemistry.”

Small amounts of arsenic and cadmium are present all over the globe and can be detected in many food products. It’s the concentration in the vegetable or fruit, the chemical form of the element, and how much of it someone ingests that determines if an individual experiences a negative health effect. High concentrations of arsenic and cadmium are clearly harmful, but even consuming very small doses over a long period of time can lead to cancer.

“How food is grown affects not only the concentration of contaminants, but also where the contaminants are stored within the food,” says Seyfferth. “If we understand the chemical forms of contaminants in soil, we can design solutions to decrease plant uptake of them.”

In this case, Seyfferth found that adding rice husk residue to rice paddy soils can help lower the amount of arsenic and cadmium taken up by the plants. Rice husk residue is plant material left over after processing rice for human consumption.

This solution is simple yet effective. Rice husk residue is high in the element silicon, which is an important nutrient for rice. The chemical form of silicon is similar to the form of arsenic taken up by rice plants when fields are flooded. This similarity helps “distract” the plant, which prevents it from taking up as much arsenic.

In soils where cadmium is a problem, rice husk residue helps make the soil less acidic. This helps to lock up cadmium in the soil. The silicon in the husk may also help decrease the toxicity of cadmium.

“Not all sources of silicon behave the same way though,” says Seyfferth. “In order for it to be effective, the silicon source must provide silicon in a high enough concentration during the time the rice plant is filling grain. Rice husk residue is a successful source because it breaks down slowly and releases silicon throughout the growing season.”

High arsenic can decrease grain yield, but Seyfferth’s work shows that adding rice husk residues can help prevent yield loss. Half of the world depends on rice as a staple food, so this research has exciting potential for positive impact.

Kudos to the food and beverage industry

FSMA: Getting to the security aspects of food

Extending the applications of Blockchain in the food manufacturing industry