Kerry’s Rome, Georgia, facility is the winner of FE’s 2022 Sustainable Project of the Year. The warehouse-turned production facility recently underwent a $125 million renovation and expansion—all while continuing production safely and achieving sustainability goals.

Renovating a facility to increase its capacity, energy use and water consumption doesn’t sound like it would earn Food Engineering’s 2022 Sustainable Project of the Year, but that’s exactly what Kerry’s coatings and seasonings facility in Rome, Georgia, has done.

Included as part of Kerry’s acquisition of Southeastern Mills’ coatings and seasonings division in the fourth quarter of 2018, the facility, a warehouse dubbed “Project Bulldog” in honor of the University of Georgia mascot, was ideally located to serve nearby protein processing customers. With consumer demand for poultry products booming thanks to the “Chicken Wars,” the project team was tasked with expanding the facility and increasing the number of coatings/seasonings lines from three to six to better serve customers.

Kerry valued input from the ultimate users of the facility and gathered insights from a group that included leads from health and safety, sustainability, quality, research and development, supply chain, operations, regulatory, information and communication technology, marketing, human resources, supply chain, procurement and many more. The purpose of this engagement was to get robust requirements that could then be collected and implemented as part of the project scope. They then engaged with a variety of experts from the area and from other facilities and brought on Dennis Group to provide additional engineering services and construction management.

The site’s location was central to creating efficiencies. “When we made the acquisition, we knew the investment we wanted to make, and that site and location was ideal for us,” says Kerry’s president and CEO, North America, Oliver Kelly. “It had the land; it was strategically placed toward the raw materials and centric to our customers.

One challenge in the $125 million project involved finding a better way to move product like flour throughout the facility. That was achieved by adding 12 new silos, each capable of holding 110,000 to 220,000 lbs. of material. Taking that through the facility—where automated systems reduce the dependence on handling 50-lb. bags—are 2.5 miles of aluminum conveyance piping with five unloading stations capable of a 500-lb./hr. capacity, all complete with the highest in food safety and foreign material protection controls for maximum food safety at a high efficiency. 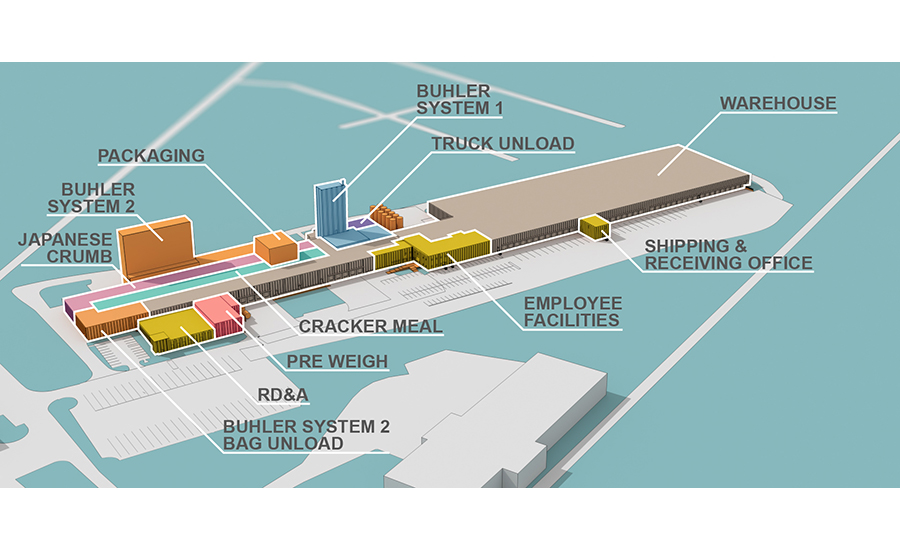 A centralized system increases the plant's efficiency by automatically staging materials and sequencing the flow of operations all controlled with a recipe management system.

As mentioned earlier, these processes are managed by automation powered by SAP using an integration with Rockwell FactoryTalk. These systems provide Kerry with the ability to manage its recipes corporately instead of at the processing facility. The thousands of data points are tracked to create reports to ensure product quality and people safety or to identify if a line isn’t performing as it should. The automated systems also mean that from the silo all the way to packaging, there’s almost no operator intervention required, which reduces chances of operator error and downtime overall. From a people safety perspective, this eliminates the need for some of the more physically demanding and unattractive roles that can be uncomfortable for employees and difficult to staff.

“A commitment to sustainability goes beyond protecting the planet,” says Kelly. “It’s about creating something better for our people and society as well, which is what we did here.”

At the outset, it would seem the team was behind the 8-ball when it came to energy efficiency. “We were taking warehouse and converting it into manufacturing space, so we already had an energy negative,” says Christina O’Keefe, Kerry North America’s director of sustainability. “So we had to find another way.”

Kerry made a public commitment that it would convert to 100% renewable electricity by 2025 at all manufacturing locations globally. So, the team decided to start with the Rome facility. O’Keefe says that while the company may explore onsite renewables in the future, it just didn’t make sense for the project at the time. Instead, Kerry turned to local utility company, Georgia Power utilizing their Simple Solar Program, supporting the growth of solar energy on the local electrical grid, and renewable certificates. This enabled the Rome facility to achieve its 100% renewable electricity goal. Kerry has since accelerated the timetable for all manufacturing locations to be 100% renewable in 2022. 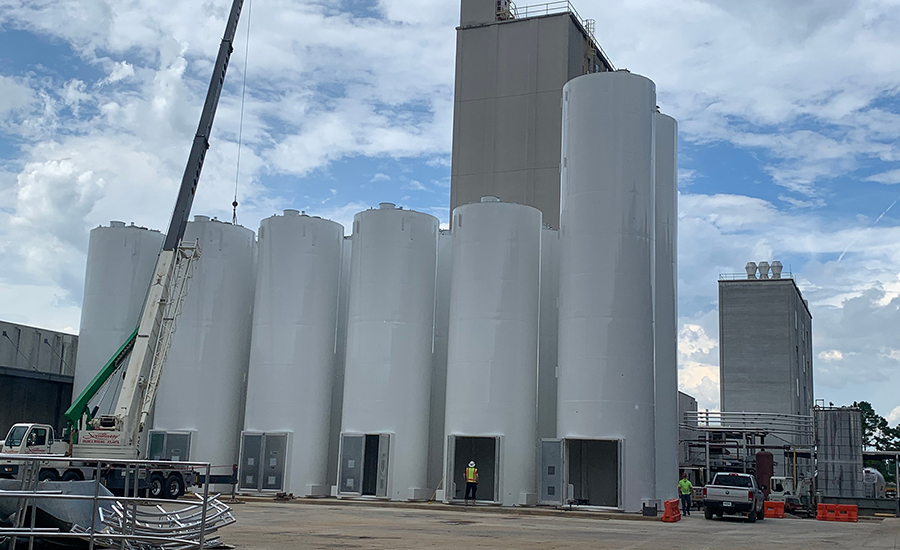 Bulk storage capabilities were added and yield a 25% reduction in freight to the site, thereby reducing the facility’s carbon footprint.

But using renewable electricity was only one part of the story. The other sustainability achievements come from the facility’s energy-efficient design. Insulated metal panels (IMPs) were used for the roof and primary walls where additions were made. Sandwiching insulating foam between sheets of metal creates an exterior shell with a high R (insulating) value while offering a variety of styles and designs that suit the desired aesthetic. Additionally, the metal shell provides a surface that is easier to clean while staying cleaner than a more porous material, and it provides a high fire rating.

Internally, the team focused on the line equipment specs for reducing water and energy consumption. Similar to how the site was chosen based on its location to mills and the shorter distances, the project team also was able to secure many of the raw materials it needed from local sources. In fact, 50 percent of raw materials are sourced within 150 miles of the facility.

Breaking Down a Precast Box

Prior to the renovation, the building was close to 400,000 sq. ft., and unlike other warehouse facilities in the area, Project Bulldog is a precast standing-t building instead of a steel structure.

“It’s a precast box, basically precast plank roof, precast columns, 6-, 8-, 10-in. thick floors. So where we have some of the new wet wash process areas, we had to completely excavate all of the existing floor, digging down 7- to 8 ft. in some cases, and we even found a granite vein that we had to work around in one instance,” says Aleisha Jaeger, Kerry North America’s director of project engineering.

Areas where existing equipment had to be removed or where new lines were added often involved a lengthy process of cutting through concrete and reinforcing it to accommodate the weight of the planned additions. In one instance, a 6-story tower was decommissioned, and the team had to pull 100 tons of equipment and infrastructure out through 10-ft. by 10-ft. openings. 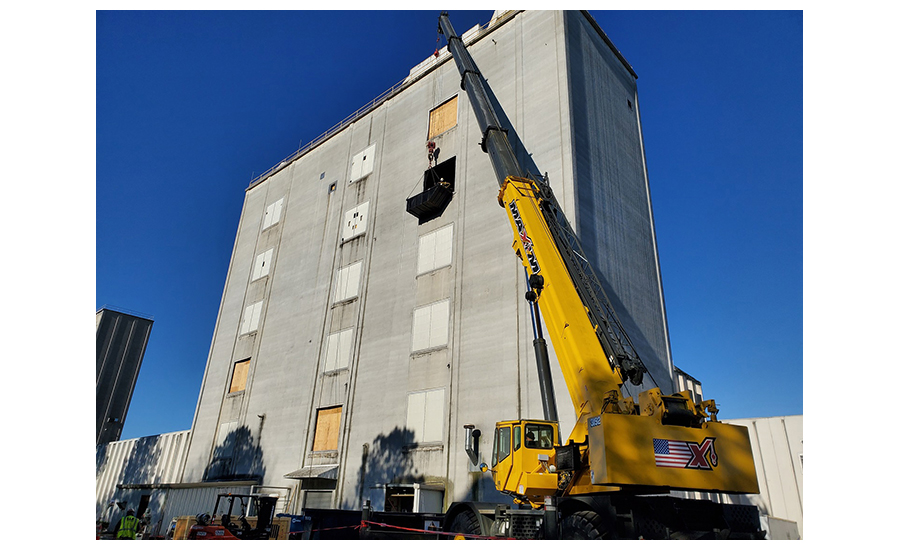 An existing process located in a 6-story tower was decommissioned and had to be removed through a carefully sequenced cutting, loading and transfer operation.

Throughout all of this—cutting concrete, ripping up floors, adding support cables, pulling tons of equipment through holes in the facility—production continued. There were no quality problems with the products. In fact, aside from all the equipment being brought in and out, it was hard to tell construction was even going on. The team attributes that to a well-planned scheme to alternate where construction was to take place. During that time, those areas would be completely separated from the production areas, with separate entrances for construction personnel.

And, of course, no project in 2020 would be complete without COVID. Kerry followed CDC guidelines in all facets of the project and was able to continue with minimal disruption to construction. But, more importantly, construction crews and plant personnel were kept safe. With over 500,000 man hours worked over the course of the project with no lost time incidents, it’s a testament the project teams' commitment to safety on the project.

“We knew where we were going with the project, and every group and every stakeholder within the project knew the plan,” says Kelly. “The entire team were very focused throughout the project. The site kept manufacturing while the new plant was being built, it was a great achievement and we are very proud of the team.”

A Commitment in Writing to Customers and the Planet

What guided the project? What set up the central tenets? Kerry’s commitment to using as many locally sourced goods and materials, both for the project and in its business, can be traced back to the company’s Beyond the Horizon sustainability program. Created in 2020, the program lays out a total sustainability roadmap to become better stewards of the planet and those who reside on it. One of those goals is to provide more than two billion people with sustainable nutrition solutions by 2030.

“The Beyond the Horizon program informed the direction of the site,” says Mike Doyle, Kerry North America’s chief operations officer. “It talks about sustainability improvements for people, with topics like food safety. It talks about being better for the planet, including the environmental objectives that we've set for ourselves. And it also talks about being better for our society, which is about people's safety and how we treat our employees, in addition to trying to create community bases around our people and our facilities.

“The other element is our goal of zero waste to landfill across our sites in North America,” Doyle adds. “By the end of 2025, we will see reductions in carbon, water and so on. So it very much informs the size and the scale of the investments that we undertake.” 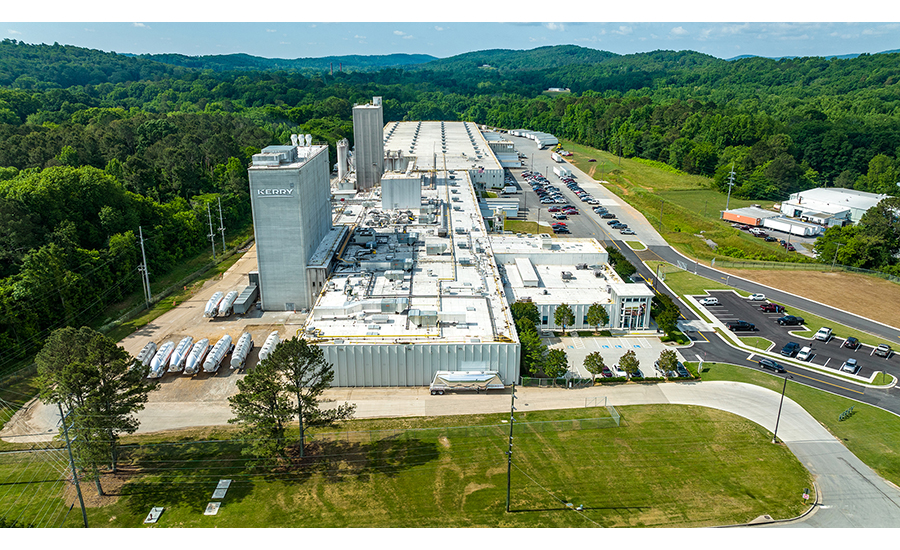 The team designed this facility with zero waste to landfill (ZWTLF) in mind, optimizing waste streams and maximizing recycling. Remaining refuse will be sent for incineration at a facility with energy recovery capabilities.

When talking about client reactions to the new facility, there has been nothing but positivity. Suppliers throughout the industry have had to deal with supply chain issues and labor shortages. But the operational efficiency of Kerry’s new plant has allowed it to mitigate the affects others may be dealing with.

“We brought some of our customers down to the opening of the new facility to show them the scale of what was built to serve their needs,” says CEO Kelly. “They were very impressed by what they saw, particularly the sustainability commitment and thought we had put into it.

“Rome has really given us a significant opportunity to pick up our business with some of the real strategic players across poultry,” says Charlie McAllister, Kerry’s meat end use market executive leader. “I’d say it's been a real bonus in that regard. We’ve picked up significant business, and we've been able to illustrate that we're a very reliable partner. It’s really strengthened our strategic relationships across the poultry industry.”

As much as the facility has strengthened Kerry’s relationships with players outside of the organization, it’s perhaps had a greater effect on the people who made it happen.

“The dedication of the entire cross-functional team from the folks in the plant to our third parties to everyone else is huge,” says Jaeger. “I'm really proud because we took the opportunity to embrace this project and expose folks with 30 years of experience to six months of experience with Kerry across functions. We had interns and grads and mentors and mentees that we were able to say, ‘This is what a $125 million collaborative project for a food company looks like.’”

“We're very proud of what we've done in Rome, and it's been a flagship investment for Kerry,” says Doyle.

All images and footage courtesy of Kerry