How Choosing a Floor Can Affect Food Safety

The difference between shutting down operations and initiating a product recall can come down to the material under your feet.

Some years ago, the television show “Mythbusters” tested the “5-Second Rule”—a belief that food dropped on the floor can be safely picked up and eaten as long as it happens within five seconds. The team tested samples of wet pastrami and dry crackers by placing them on bacteria-infested floor tiles for two and six seconds, then did cultures to see how much bacteria formed compared to a control. In the end, time didn’t really make much of a difference with regard to how much bacteria the food picked up. All that mattered was that the food dropped to touch the bacteria on the floor. That’s why any product that falls to the floor in a food plant is immediately discarded. But a potential problem in food manufacturing is if the bacteria on the floor rises to meet the product. That’s why the choice of floor and drain are so essential to reducing the risk of product contamination.

The CDC estimates that each year roughly 1 in 6 Americans (or 48 million people) gets sick, 128,000 are hospitalized, and 3,000 die of foodborne diseases. A CDC report from 2018 found that incidents of foodborne illness have been on the rise in the U.S. How does that compare to other countries? Well, the UK’s Food Safety Agency (FSA) says that it’s all but impossible to do an accurate comparison from one country to the next. 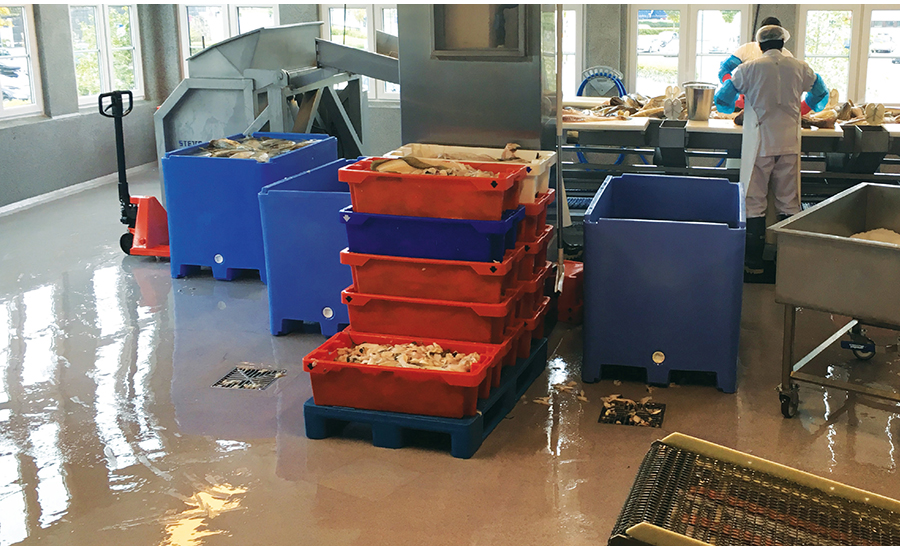 Choosing the proper flooring type is essential to inhibit bacteria propagation in a floor. Food processing plants are particularly susceptible, especially if large quantities of water are present. However it is possible to achieve a long-lasting floor that prevents bacteria accumulation. Image courtesy of AcryliCon USA

“The only way you could attempt this would be for different countries to have the same type of study with the exact same study specifications, over the same time period,” says FSA head of science, evidence and research, Rick Mumford. “Even then, differences in underlying surveillance data available in each country could cause issues, particularly in terms of determining what proportion of IID [infectious intestinal disease] cases are due to food.”

While it might be impossible to make an accurate statistical analysis of foodborne illnesses from one country to the next, Jason Bye, U.S. director of AcryliCon USA, has done an anecdotal and visual comparison of flooring in food processing facilities in Europe and the U.S. “The photos that I have in my computer that I've taken of food processing plants around the United States, you literally want to burn your shoes after you leave,” he says of what he’s seen.

It’s due to the incredible amounts of bacteria accumulation. Granted, a flooring professional wouldn’t necessarily be called in to a plant unless there was a need for work to be done on the floor, but some of the facilities where he’s seen such problems had flooring that was only a few years old. The state of those relatively new floors stand in stark contrast to others he’s seen in Europe, particularly fish processing facilities in Norway.

“I first went to Norway 15 years ago, and took well over a thousand photos during a five-day trip looking at references across the country,” says Bye. “I brought these pictures home and shared them with my father who'd been in the business for 40 years at that point. He looks at them and says, ‘Jason, we have nothing like this in the United States.’”

What he saw was AcryliCon flooring. 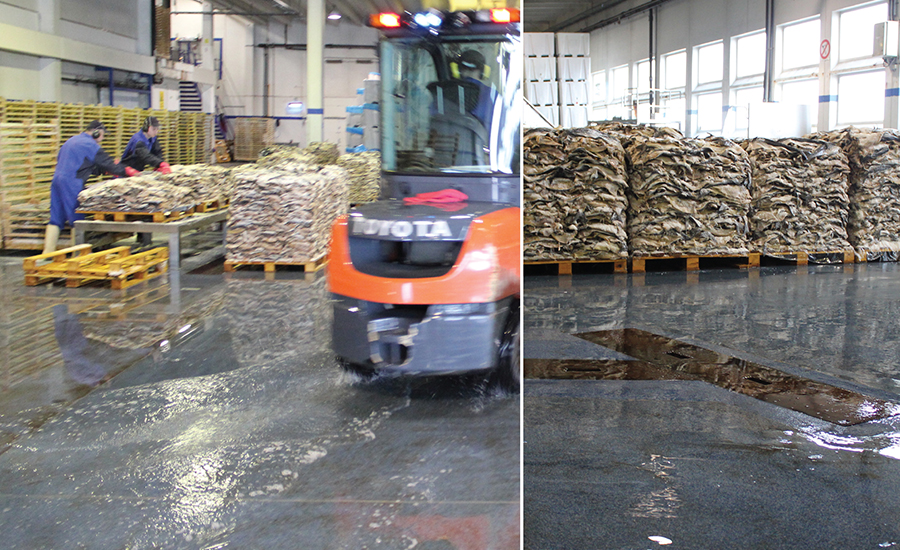 These images are of floors in fish processing facilities in Norway. The pictures were taken in 2018, but the floors were installed in 1997. Despite being constantly wet for 20 straight years, the floors retain a "like new" functionality. Images courtesy of AcryliCon USA

While some may say that AcryliCon is simply a methyl methacrylate (MMA) resin floor, Bye points out that AcryliCon has twice the compressive strength, and that the company has references, particularly in fish processing, that are 30 years old and still performing as well as they day they were installed—thus essentially putting it in its own generic category.

Talking about food processing floors, Bye asks “What does lasting really mean?” pointing out that many of the fish plants he toured were more than 20 years old, but didn’t reek of fish and weren’t full of bacteria—despite the floor in a fish processing facility being constantly wet. He attributes that lack of bacteria build up to the non-porous nature of the flooring, adding that AcryliCon flooring manufacturers in Norway enjoy a large portion of the market share while facing many of the same competing products in the U.S.

The problem, he says, is that some popular choices for flooring in food processing plants, while seemingly not porous, actually have microscopic “pinholes” where bacteria can enter. Washdown procedures are unable to get to the bacteria because the small size of these holes essentially protect the bacteria once it’s in. The surface may be clean, but there are still underlying problems.

Other flooring types used in food production facilities pose a different challenge because they use grout. While the flooring itself may not be porous, the grout is. Bacteria is able to infest the grout all the way down to the setting material. Once in the setting, the bacteria is all but impossible to get rid of without ripping up the floor.

Eoin Rochford, plant manager for seafood producer NORPEL, has seen exactly what Bye has seen with other materials. “You wash a floor, but stuff gets sucked in under, and you can’t clean that out. You can clean the surface of the floor so it looks clean. But then you drive a forklift over it one time, and it squeezes the water out. And that’s where all the bacteria and the smell comes from.” 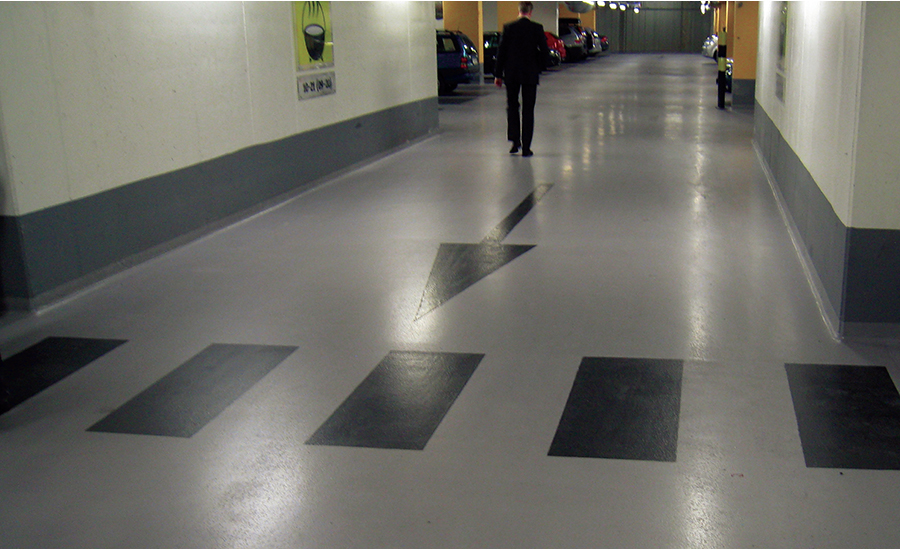 AcryliCon flooring can be installed in other places in need of flooring resistant to bacteria accumulation. Image courtesy of AcryliCon USA

Once that bacteria has made its way back to the surface, the washdown of the floor can cause the bacteria to become airborne and potentially end up infecting the product. In fact, floor washdowns can compound the problem.

“What happens here in meat plants in the United States, they start cleaning with hotter and hotter water thinking they’re killing the bacteria,” says Bye. “They’re actually making things worse because they’re putting down 160°-180° water that’s breaking down the floor faster, making it more porous and allowing more bacteria to be fed and protected.”

Given the potential benefits to a facility to use an AcryliCon floor, why don’t more have one installed compared to European facilities?

“The biggest difference between here and Europe,” says Rochford, “is a CFO here would use an inferior product if they were going to save money. Whereas in Europe, they look at the long-term. Even if the payback is 20 years, they’ll do it if they never have to go back and redo the floor.”

Having to redo a floor is where Bye says companies are costing themselves more than the upfront costs of an AcryliCon floor. In addition to the construction costs of removing and reinstalling a floor, manufacturing operations have to be shut down. The cost of shutting down production to accommodate flooring renovations every 10-or-so years should be taken into account when considering a new floor—in addition to the potential shutdowns caused by contaminated food from bacteria originating from the floor.

“I’m thrilled to talk about this,” says Bye. “Nobody talks about this in the U.S. But as a U.S. citizen, I know that when I install a floor I'm really proud of it because I know at least one more floor is going to be hygienic.”

All Floors Lead to Drains

There’s still one more element to preventing bacteria growth underfoot in a processing facility: the drains. And much like all roads leading to roam, all floors point to the drain (hopefully). Because of this, there is as much potential bacteria buildup with a drain as there is the floor.

“A lot of people overlook drains until it either becomes an issue that they need to address or someone else has told them that they've got to look into it a bit more,” says Kyle Michalick, Midwest territory sales representative at Global Drain Technologies. “But people are starting to realize that any bacteria on the equipment getting washed away is going down the drain.”

Michalick says that one of the biggest misconceptions is that all drains are the same. But just like the type of equipment in a facility depends on the product being processed, so too does the drain. For one, the type of traffic where the drain will be placed matters: Is it in a loading dock or where the processing actually takes place? Will forklifts be running over it or not?

The drain will also need to be able to maintain structural integrity. Much like the machinery, most drains in food processing areas will be made of stainless steel to be able to withstand the same type of abuse. Again, though, material type is dependent on the activity.

With flooring, bacteria can become an airborne contaminant during washdowns. With drains, it’s not so much about the bacteria coming back up, but ensuring it facilitates the bacteria removal from the machines. That’s where harbor points come in.

“A harbor point means there's a place for the bacteria to settle in and not be as easily killable,” Michalick says. “So when the bacteria is growing, it's looking for corners.” Removing 90° angles as much as possible and instead using rounded edges makes it much more difficult for bacteria grab a foothold, he adds. This is why it’s also important to have as seamless a connection between the drain and floor as possible. “If it’s not seamless, then that can create another harbor point.”