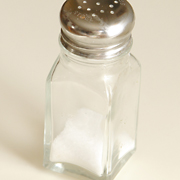 In observance of American Heart Month, The Centers for Disease Control has released a special report in its February edition of CDC Vital Signs. The report, Where’s the sodium? There’s too much in many common foods, states that about 90 percent of Americans eat more sodium than is recommended for a healthy diet.

►Reducing the sodium Americans eat by 1,200 mg per day on average could save up to $20 billion a year in medical costs.

►Brands of food matter, too. Different brands of the same foods may have different sodium levels. For example, sodium in chicken noodle soup can vary by as much as 840 mg per serving.

“Over-consumption of sodium is one of the single greatest causes of hypertension and cardiovascular disease, and restaurant and packaged foods—not salt shakers—are far and away the largest contributors of sodium in the American diet,” says Julie Greenstein, CSPI deputy director of health promotion policy. “Unfortunately, the food industry has failed to significantly bring down sodium levels despite 40 years of governmental admonitions. It’s time for the FDA to step in and require reasonable reductions.”

For more on the CDC report, visit CDC online.

For more information from CSPI, download CSPI’s letter to FDA.