A recent technical paper grades food safety performance from A to F. 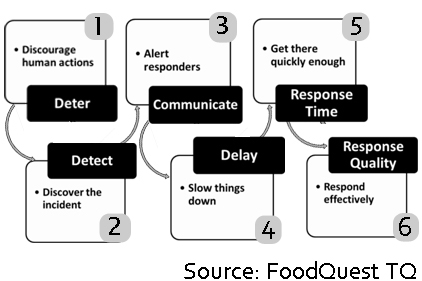 The importance of effective food safety systems cannot be understated, yet no framework exists for analyzing quantitative data to assess US government and industry effectiveness. In the absence of such data, a recent Food Defense TQ technical paper from FoodQuestTQ seeks to use anecdotal evidence to establish and grade performance on seven benchmarks for creating a safer food supply.

The report grades 2012 levels of industry and government performance from A to F and makes several recommendations for improvement. The lack of current reporting requirements for defined performance benchmarks, Food Defense TQ says, makes quantitatively assessing performance in creating a safer food supply extremely difficult. The underlying purpose of the report is to encourage a framework which will result in standardized reporting requirements, making food safety a science-based endeavor as required by FSMA rather than a subjective art.

Food Defense TQ’s Complexity Systems Management (CSM) Method examines both the food safety and food defense risk countermeasures that comprise the entirety of the food protection system. The CSM Method is made up of seven steps on a food threat and risk continuum: deterrence, detection, communication, delay, response time, response quality and mitigation. Performance along this continuum dictates grades given for the seven benchmarks discussed above, as well as successful performance results in prevention.

In the first benchmark, deterring the contamination of food, Food Defense TQ assigned a C- for the use of science- and risk-based methods; a D for the timeliness and quality of government inspection; and a B+ on efforts to educate consumers. Instead of shifting to a science-based method, the report says government has pursued a one-size-fits-all policy for small, medium and large operations. The result is that some companies defer to the government’s lower regulatory compliance standards in an attempt to save money, not realizing a science-based method would result in greater cost efficiency than the current approach.

In the detection category, government and industry received a C- in identifying contaminated food products; a C+ in reducing the risk associated with their consumption; and a C- on interdicting the consumption of contaminated products. Food Defense TQ says although government and industry have the scientific and technical means to identify contaminated food products, they often do not use them. Large bulk testing often occurs at the beginning of the food manufacturing process with almost no testing at the end of the stream.

Delays in reporting a potential recall while awaiting a full-scale response were also widespread. The report issued C grades for both timeliness of informing consumers about a possible recall as well as making a “recall or no recall” decision. Government and industry received a C- for determining the scope of a recall. Because consumers are not informed about the decision to recall a product until it has been made, the threat of consumption remains extremely high. Likewise, larger distribution scales make consumption more likely. The report found the decision to initiate a recall was influenced by multiple, often conflicting, risk factors including the cost of the recall, the likelihood of deaths or severe illness and the cost-benefit analysis of litigation versus recall.

Availability of traceability records received a C-, while recall management actions and logistical support each received C grades. Food Defense TQ says the timeliness of responses is complicated by the complexity of interrelated supply chains, resulting in broader recalls involving multiple companies and their suppliers.

Quality of response involves the evaluation of a number of steps. Food Defense TQ assigned a C- for identifying the product; a C for informing consumers of danger; a B- for having comprehensive traceability records; and a C for recall training and testing. The report found that while industry may notify the government promptly of any food contamination resulting in illness or death, notifications are typically made after the fact. The passage of the Bioterrorism Act of 2002 compelled some industry progress in implementing a “one-up and one-back” traceability standard, but room for improvement remains.

The report’s examination of food safety benchmarks led to four general observations. First, no set of common standards or criteria exists to guide protection of the food supply. Rather, varying schemes with different risk countermeasures have proliferated and are used across the world. Second, government and industry aren’t judging their food protection performance by scientifically derived measures, despite the availability of such methods. Third, stakeholders do not use a systems-based approach to gauging food safety performance. Finally, the type of information and data required to quantitatively evaluate the food industry is not being collected or utilized.

While many food defense protocols like HACCP and CARVER + Shock are in wide use, their effectiveness cannot be proven or disproven without a systems model or the collection of food protection performance data.

To achieve scientifically derived, risk-based food protection measures, government and industry should better utilize the scientific method and use risk management methods in creating those standards. Researchers also recommended the adoption of a systems approach considering prevention and response across the food threat continuum. To facilitate the collection and analysis of data to quantitatively evaluate performance, industry and government must establish data keeping, collection and analysis requirements to gauge performance.

To read the full report from FoodQuest TQ, click here.