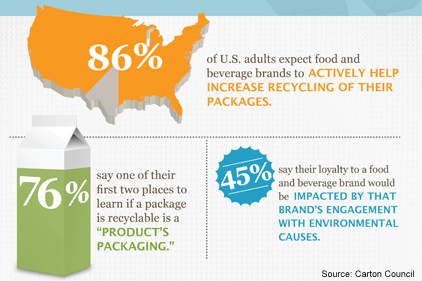 Consumers want recyclable packages, and they want to be able to know if packaging is recyclable by looking at it.

A survey conducted on behalf of the Carton Council of North America (CCNA) found 86 percent of consumers expect manufacturers to increase recycling of their packages, and three out of four prefer to learn about a package’s recyclability from the package itself. A distant second, 33 percent, say they look to a company’s website for recycling information, while 26 percent visit their city’s website. Only 8 percent ask a salesperson or retail store employee.

“First and foremost, this survey reiterates the importance of including a recycling message on product packaging,” says Jason Pelz, vice president, environment, Tetra Pak North America, and vice president of recycling projects for the Carton Council of North America. “In an increasingly competitive and green‑minded climate, consumers are revealing they expect food and beverage brands to actively help increase the recycling of their packages.”