Norovirus leading cause of disease outbreaks from contaminated food 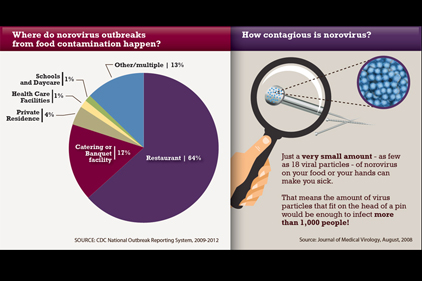 Eighty-one percent of norovirus outbreaks from contaminated food happen in the food service industry according to a vital signs report by CDC.

Infected workers are typically the source, the report states, often touching ready-to-eat foods with their bare hands. To prevent this, CDC says food safety measures should be enforced.

“Norovirus outbreaks from contaminated food in restaurants are far too common.” says CDC Director Tom Frieden in a statement. “All who prepare food, especially the food service industry, can do more to create a work environment that promotes food safety and ensures that workers adhere to food safety laws and regulations that are already in place.”

While hand washing, using gloves and proper on-the-job training are basic food safety principles, CDC representatives said there is concern over the number of employees reporting to work sick. According to CDC, one in five workers reported they came to work while sick with vomiting or diarrhea.

From 2009 to 2012, 1,008 norovirus outbreaks were reported from contaminated food. Most of the contaminations occurred during final preparation of the food with leafy vegetables, fruits and mollusks the most common foods linked to an outbreak.

CDC says “norovirus is highly contagious and can spread anywhere people gather or food is served, making people sick with vomiting and diarrhea.”