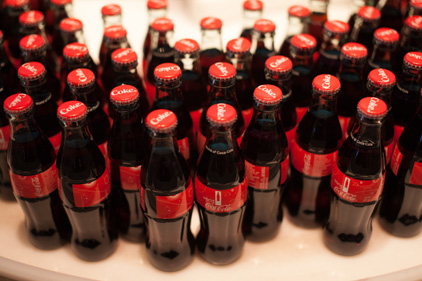 The iconic Coca-Cola bottle turns 100 this year and the company is rolling out a year-long campaign to celebrate this milestone and honor the bottles distinctive shape and design.

“Since its creation in 1915, the Coca-Cola bottle has achieved iconic status as a symbol of refreshment and uplift and it remains an important asset for our business today.” said Marcos de Quinto, chief marketing officer for the Coca-Cola Company.  “The campaign, which will be executed in over 130 countries, is our invitation to consumers around the world to share in the specialness of an ice-cold Coca-Cola.”

According to the company, the bottle was born on Nov. 16, 1915 as a creation of the Root Glass Company in Terre Haute, Indiana.

“With its unmistakable curves and a distinctive contour, the bottle has become a global icon, inspiring a century’s worth of signature moments in film, social history, design and the fine arts,” the company said.

Plans for the celebration include new advertising, a music anthem and a series of art exhibits featuring works by some of the world’s leading contemporary artists.

The Coca-Cola Bottle: An American Icon at 100 - Art Exhibition at the High Museum of Art in Atlanta, Georgia.

Kissed By – Out of Home and print campaign featuring iconic celebrities.

Nobody Like You – New Music Anthem from emerging artist, Francesco Yates.

Kiss The Past Hello – A book published by Assouline and featuring classic and contemporary images of the bottle.