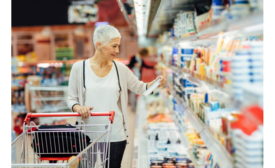 As the consumer-packaged goods (CPG) industry accelerates in the digital era, rapidly changing and less predictable consumer behavior is redefining how competitive advantage is established and maintained.