With the available technology today, food processors can neutralize odors safely without covering them up—and with natural, safe substances

In today’s manufacturing and production world, an organization’s success depends on ecological consciousness and the impact they impart on the environment. This environment includes not only the flora and fauna, but also the nearby neighbors, bringing odor control into the spotlight.

Many companies mismanage odors by attempting to cover up foul smells, but this is not an effective practice because simply masking odors is a temporary solution. To properly manage odors, it is necessary to neutralize them by altering their molecular makeup to eliminate unpleasant smells.

Effective odor neutralization requires analysis because there is no one-size-fits-all solution. For example, the chemistry required to neutralize odors varies greatly between a spice production facility and a wastewater treatment plant. Food processors must sometimes distinguish among various odors in the same facility—for example those caused by production, processing, or waste products—and use the proper substances to neutralize each.

Accurately determining these problematic odors and their neutralization requirements is very challenging, but producers can enlist the help of suppliers with knowledge and advanced laboratory technologies—such as gas chromatographs—to identify molecular chemistry and mitigate odors. The experts at these suppliers can then prescribe and provide products specially designed to remove these odors.

Foul odors in the food industry vary in type and strength, since they can originate during production, processing, or waste treatment. These odors can be offensive at best—or harmful at worst—to plant personnel within and the public outside the facility.

Some food processing facilities have their own wastewater treatment plant with lagoons of smelly fats and greases. Sludge made during water clarification can also cause odors, and even positively-associated scents—like those from spices and sweets—can become offensive over time.

While there are many odor control methodologies in the food industry, traditional solutions each have shortcomings in various forms. These methods include masking agents, chemical scrubbers, adsorption and carbon filters, ozone, biological filters, and others (Figure 1).

Each of these traditional methods is either hazardous, ineffective on organic or inorganic odors, unsuccessful at neutralizing odors, or a combination of all these issues. Modern plant-based odor removers safely span all odor removal applications using research-based formulations.

These are just a few examples of food facility odor issues, and there are many more.

Meat and seafood processing plants have a challenging time controlling foul odors since they occur naturally when organic material is transported or stored. From farm or sea to processing and rendering, the handling of meat and seafood through different facilities can create issues.

Even pleasant scents, like those from confectionary plants, can become a nuisance at high concentrations. Additionally, the sterilization process in chocolate factories releases volatile gases into water, creating foul odors.

An effective research-intensive and plant-based solution

Where traditional methods fall short, modern plant-based odor eliminators get the job done. Approved for use on the perimeter of food processing plants in accordance with odor control guidelines, these versatile formulations are the result of carefully crafted and industry-specific research.

In the lab, scientists study gaseous samples collected from facilities using gas chromatography mass spectrometry (GC-MS) to determine the molecular makeup of odors, even those present in minute amounts (Figure 2).

A GC chromatogram (Figure 3) is a visual output of the data recorded by the detector. It is presented as a plot of detector response (y-axis) versus retention time (x-axis). 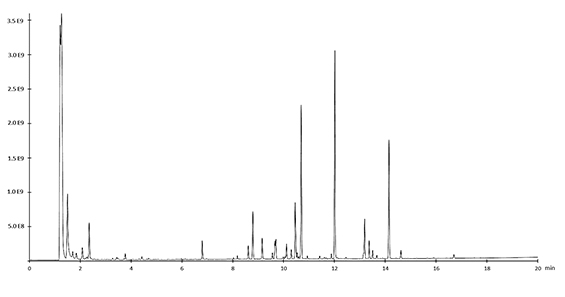 Figure 3: Each peak in a GC chromatogram represents the presence of a compound, identified and quantified by the x- and y-axes, respectively. Image courtesy OMI Industries

Each compound detected appears as a single peak on the graph, with the corresponding retention time value used for identification. Once the odor-causing compounds are identified, the scientists concoct a formulation using plant oils to molecularly neutralize the odors when the compound is combined with the odors in the atmosphere.

This results in versatile and cost-efficient solutions, specially crafted for maximum effectiveness in each application, leveraging customized concentrations of plant oils, biobased surfactants, and water to eliminate odors.

Regulations and guidelines prevent these odor eliminators from coming into contact with food products, often placing them in exhaust stacks and vents, near dryers, around wastewater, and in culture processing. Vaporization systems are effective in these and other areas, using the custom formulations to neutralize odors.

Through atomization, concentrated odor eliminators are mixed with water and pumped through pipes to affected areas. Droplets are sprayed into the air, neutralizing odor molecules on contact (Figure 4). Atomization nozzle systems provide a significant level of control, with the ability to vary product volume, surface area, and spray method.

Atomization can occur via hydraulic high-pressure or pneumatic low-pressure systems. High-pressure systems treat odors by dispersing a fine mist into the air to treat escaping gas emissions and surface odors, while low-pressure fan systems are effective in confined spaces and environments for containing multiple odors released in a small area.

These portable systems spray a mixture of odor eliminator and water through a fan’s jet stream, creating a fine mist throughout the area. Because atomization delivery systems are generally compact, they are flexible and customizable, and easily transitioned from one process area to another. Additionally, the use of concentrated odor eliminators eases shipping and storage because water, which makes up most of the bulk and weight, is added at the site.

Unlike atomization, no additional water is added in vaporization systems, which pump undiluted odor eliminators through perforated pipe distribution systems, creating a dry vapor to eliminate airborne odors. Vaporization uses less water compared to atomization, providing cost savings and a more eco-friendly delivery method (Figure 5), but it is limited to use in less humid locations. 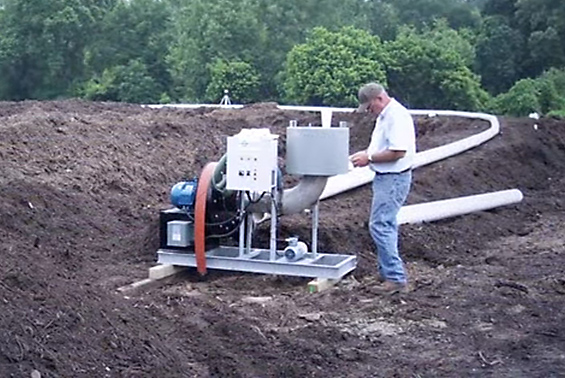 Vapor phase systems deliver dry odor eliminator at rates as low as 130 cubic feet per minute (CFM) to as high as 2,400 CFM, making them adaptable to many locations and applications. These flexible and efficient delivery systems:

The area included four large tanks—two equalization basins, a bioreactor, and a denitrification tank. To cover the area, engineers installed a 1200 CFM vapor phase unit to deliver Ecosorb 806, a proprietary blend of essential oils, biobased surfactants, and water designed specifically for the chemical makeup of wastewater odors. These odors include the gases from compounds such as chicken, beef, and seafood. The unit wrapped around the perimeter of each of the four tanks, neutralizing odors before they could escape the area (Figure 6). 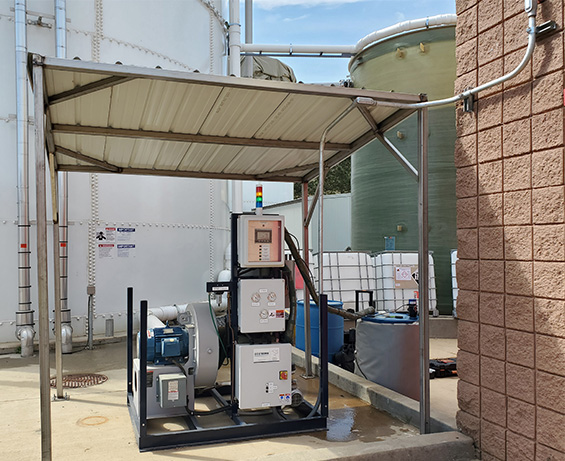 After installation, the manufacturer experimented with different odor eliminator flow rates and concentrations, and since dialing in the ideal settings, neighbor complaints dropped sharply. As part of the service and warranty plan, the system undergoes quarterly maintenance and upkeep visits from the manufacturer to ensure efficient operation around the clock.

At another facility, a poultry processor positioned between an industrial business park and a residential area also faced an odor problem. Driven by complaints from nearby residents, the company needed to address the strong septic smells produced by waste from its digester (Figure 7).

The processor made two failed attempts at odor mitigation using traditional technologies before discovering OMI’s Ecosorb product line. Additionally, the Ecosorb 606-O system, which ultimately proved successful, cost less than the two ineffective systems. The atomized odor neutralizer from the system absorbs, reacts with, and removes odor molecules from the air around grease skimmers, fatty acids, and other oils—instead of simply masking the smells like the previous products.

By removing odors, the processor can run production at peak performance without worrying about negative effect on the surrounding community. The natural odor neutralizing products do the job without harsh chemicals or unsafe solutions, empowering the processor to keep its commitment to consumer and staff safety. Due to its high efficiency, this odor eliminating formula is effective using only half the dose prescribed in the previous failed implementations.

Laura Haupert, Ph.D., is the Chief Scientific Officer for OMI Industries, where she leads research and development, regulatory, safety, and quality control. She earned her B.S. in chemistry from Manchester College and Ph.D. in physical chemistry at Purdue University, working with bond energies of solvated clusters. Dr. Haupert also completed her post-doctoral research at Purdue where she focused on the development of mass spectrometric methods for the structural elucidation of lignin catalytic degradation. Dr. Haupert has developed and directed OMI’s many product lines—and she has overseen the state-of-the-art laboratory and production facility in Rising Sun, Indiana—for over ten years.