Alternative proteins—especially cell-based seafood and meats—hold promise for the future, considering that animals are eliminated from the production chain. But, for those food processors seeking to make cell-based products, they face a steep cost of entry due to research, regulations (both USDA and FDA) and the difficulty of scaling up production from a lab bench to the processing plant. Plant-based proteins, however, have been somewhat easier, as much of the work has already been done, and suppliers of both equipment and ingredients are becoming easier to find.

A research report from CRB entitled, “Horizons: Alternative Proteins,” reveals “a tricky path ahead, promising great reward, but potholed by risk.” While there has been much innovation and aspiration among new entrants of alternative proteins, at the same time, they face high materials cost, regulation and scalability challenges.

The trick is getting a product to market quickly and efficiently at a price consumers are willing to pay. According to the report, scaling up a successful lab project to an industrial process can be the biggest obstacle they will face. For example, innovations recently have lowered the patty price of cell-based meat products to about $100—down from $500 or more in the recent past, but how many consumers will pay $100 for a hamburger?

Would-be processors of cell-based proteins—two-thirds of those responding to the CRB survey—indicated they will spend less than $25 million over the next one to two years to expand, retrofit or build new facilities to produce alternative proteins. The report suggests, however, that the progression to large-scale manufacturing will require much larger budgets and outsourced support. In terms of construction, about 80% of survey respondents were likely to consider an end-to-end approach, ranging from design and construction to validation. 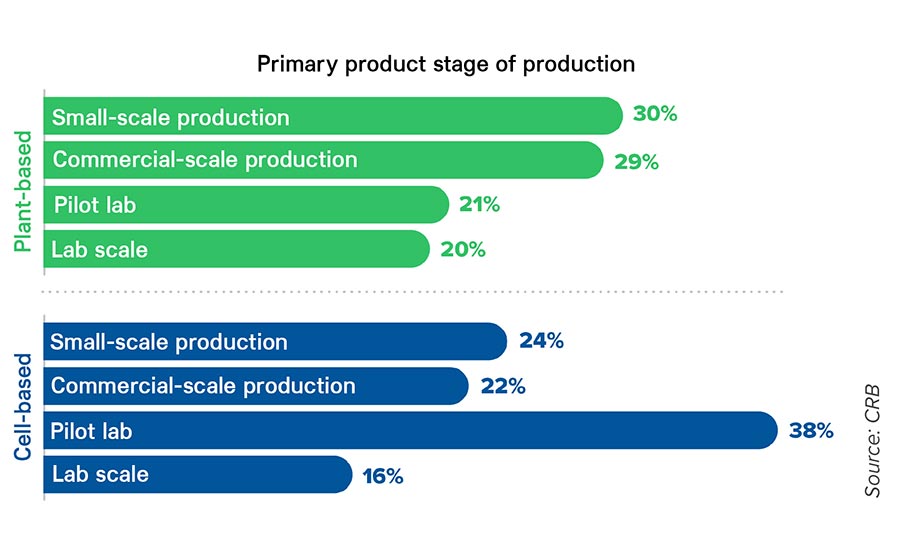 Where a beef producer reports to the USDA, the application of regulations for a cell-based protein supplier seems confusing. Because cell-based meats are produced without an animal, who sets the regulations? More than three-quarters of survey respondents thought their companies should follow the same rules that apply to traditional protein products. However, half of those surveyed expect new regulations in the next two to three years, and more than a third expect new regulations in the next five to 10 years.

The CRB survey revealed some confusion among processors. While 52% of respondents said their products are held to USDA regulations, only 47% believe the FDA regulates their products. But today, FDA regulations apply to all companies that produce plant-based or cell-based protein alternatives. Cultured-cell meat producers must follow both FDA and USDA regulations—not to mention any applicable state and local laws.

Fortunately, manufacturers of plant-based and cell-based proteins have some advantages in that they’re not total pioneers when it comes to looking for expertise and equipment for their alternate protein plants. Even plant-based “yogurt” manufacturers can look toward dairy yogurt processes for conceptual ideas in setting up production.

The CRB report suggests, however, that alternate protein processors can look to the biopharma industry for guidance, where bioreactors, fermenters, ultra-filtration units and such equipment are already commonplace. For example, the biotech industry has been growing animal cell cultures in large-scale bioreactors for decades. These same upstream processing principles can be adapted to the food industry to aid alternative protein manufacturers in refining and scaling their technology, says the report. And, over time, as the demand for additional equipment expands, so will the availability of equipment, and cost of equipment and materials will decrease. 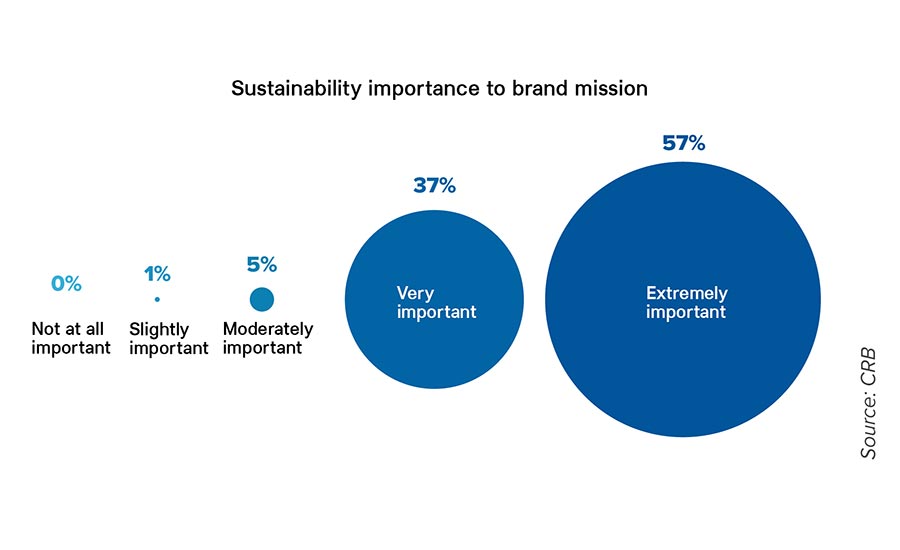 In the CRB study, the vast majority of respondents say that sustainability is very or extremely important to brand mission in alternative protein products, and this includes conservation of energy and water from the beginning to the end of the process.

Cell-based producers also have the option of looking to biopharma for access to food-grade media, the CRB report adds. Biopharmaceutical companies have long figured out how to simplify cell culture media (such as chemically defined media) and manufacture it efficiently and in large quantities. But there remains a problem—media developed for biopharma is expensive. The CRB report suggests that if alternative protein processors want to manage their costs, they should turn to their own capacity, rather than commercial sources. By vertically integrating media production in house, they could dramatically reduce their production costs over time.

In the case of scale-up, processors need to think of every decision in the lab like an echo chamber, per the report. Consequences that may seem unimportant early on will be amplified at the commercial scale, potentially creating major roadblocks. For example, processors shouldn’t necessarily consider using slow-growing starter cells because they’re cheaper. They can tie up bioreactors and decrease throughput—even if parallel lines are set up. 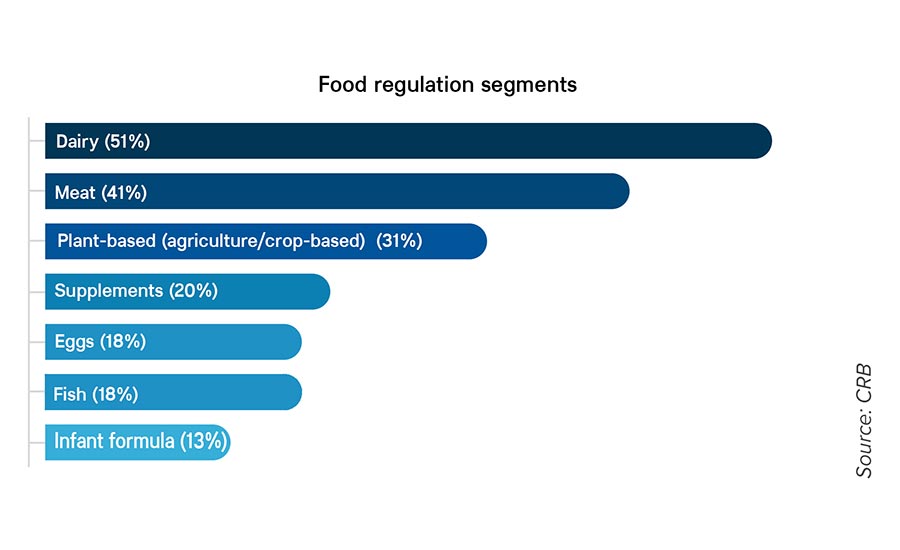 When asked under which segment(s) of food regulations does a processor believe its product falls, responses showed a degree of confusion, which may arise in part because the final products often have the terms “meat” or “milk” on their labels, and producers believe they may need to follow the regulations that apply to the meat or dairy industry. Some processors told CRB that while they know it’s not milk, they intend to treat it as if it were in anticipation of potential changes to the regulations.

However, sustainability can’t be claimed just because the product didn’t come from animals, says the CRB report. Take almonds, for example. Once a star ingredient, almonds are falling in popularity because of how much water they require during cultivation. Consumers are paying attention. Increasingly, “plant-based” is no longer adequate shorthand for “environmentally responsible.”

As a result of this shift in thinking, alternative proteins are moving toward the concept of end-to-end sustainability, inclusive of the entire manufacturing process—not just the end product. By designing systems and processes that reduce their energy load and improve the bottom line, manufacturers are hoping to polish their brand promise while also reducing their cost to the consumer.

For example, the research found that only one-third of respondents plan to charge consumers more than the average cost of beef, beyond 31 cents per ounce, while the majority are targeting a price at or below that threshold.

Respondents to the survey were asked what end-to-end sustainability is, and carbon footprint and energy/wafer consumption emerged among their top ranking choices. Asked how they expect to reduce those costs, respondents said efficiency of their utility systems and availability of new technologies will help them reduce their water and energy needs.

The CRB report also covers manufacturing processes, looks at future needs and costs, and delves into project execution and supply chains, as well as defining product categories and regulations. The 66-page report can be downloaded for free at https://go.crbgroup.com/horizons-alt-protein.