Consumers have a right to know what’s in their food, but this proposal was flawed. 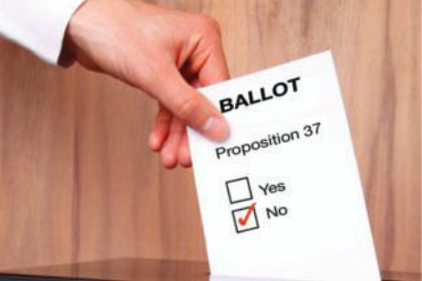 California’s Proposition 37 (aka “Prop 37”), requiring genetically modified/engineered ingredients to be listed on food labels, was voted down during the recent election. Millions of dollars were spent on both sides to sway the minds of voters, but many legal experts claimed the proposition was poorly written, inconclusive and had too many loopholes that would have had processors scrambling and kept lawyers “in the green” for years to come. Prop 37 received 4,845,291 NO votes (53.1 percent of the vote) and 4,285,787 YES votes (46.9 percent).

“Genetically engineered foods found on market shelves have most commonly been altered in a lab to either be resistant to being sprayed by large amounts of toxic herbicides, or to produce, internally, their own insecticide,” says Mark A. Kastel, co-director of The Cornucopia Institute.

“Corporations that produce both the genetically engineered crops and their designer pesticides, in concert with the multi-billion-dollar food manufacturers that use these ingredients, fought this measure tooth and nail, throwing $46 million at the effort that would have required food manufacturers to include informational labeling on GMO content on their packaging,” adds Kastel.

“California voters clearly saw through Prop 37 and rejected higher food costs, more lawsuits and more bureaucracy,” says Henry I. Miller, MD, a fellow at Stanford University’s Hoover Institution and the founding director of FDA’s Office of Biotechnology (1989-1993). “Food labeling policy should be based on logic and science, not fear. Leading scientific organizations have all agreed that foods containing genetically engineered ingredients are safe and are not materially different from their traditional counterparts. We’re glad the voters rejected this misleading, costly and unnecessary measure.”

“GMA and its member companies are pleased that California voters have rejected Proposition 37,” says Pamela G. Bailey, Grocery Manufacturers Association president and CEO. “Proposition 37 was a deeply flawed measure that would have resulted in higher food costs, frivolous lawsuits and increased state bureaucracies. This is a big win for California consumers, taxpayers, businesses and farmers. Foods and beverages that contain genetically engineered ingredients have been exhaustively studied, and all of the leading scientific and regulatory bodies, including the US Food and Drug Administration (FDA), US Department of Agriculture, the World Health Organization and the American Medical Association, have concluded that these products are safe and are not materially different than their traditional counterparts.”

Even though Prop 37 lost, Kastel concedes there is even a better way for consumers to be assured they’re not getting GMOs with their food, and it’s already in existence. According Kastel, the failure of Prop 37 doesn’t leave consumers completely in the dark about genetically engineered (GE) foods, since foods without GE ingredients are already widely available and clearly carry the USDA Organic seal. Federal law prohibits the use of GE seed or ingredients in any product labeled organic.

“In some ways, the [USDA] Organic label goes much further than what Proposition 37 would have required, since organic meat, milk and eggs must come from animals that were not treated with GE hormones and fed a diet that is free of GE ingredients,” says Kastel. Proposition 37 would not have required labels on meat, milk and eggs from animals given GMO feed. Alcoholic beverages were also not covered under Proposition 37. Organically labeled beer, wine and spirits are increasingly available in the marketplace.

“Organic foods are already required by federal law to be free from genetic engineering,” says Steven Sprinkel, an organic farmer in Ojai, CA who fought for Prop 37 passage. “And the icing on the organic cake is that certified organic foods are also grown without a long list of dangerous and toxic chemicals and pesticides, hormones, antibiotics and other drugs that are routinely used in conventional agriculture.”