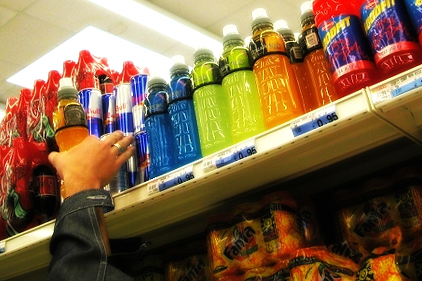 An ongoing study at the Radiological Society of North America says energy drink consumption is linked with higher levels of heart contraction among healthy young adults. Radiology resident Dr. Jonas Dörner of the University of Bonn, Germany presented the results at the society's annual meeting in Chicago.

Dörner administered cardiac magnetic resonance imaging MRIs to measure the effect of energy drink consumption on heart function in 18 healthy volunteers, including 15 men and three women with a mean age of 27.5 years. Each of the volunteers underwent cardiac MRI before and one hour after consuming an energy drink containing taurine (400 mg/100 ml) and caffeine (32 mg/100 ml). A cardiac MRI performed one hour after study participants consumed an energy drink revealed significantly increased peak strain and peak systolic strain rates in the left ventricle of the heart.

Researchers found no signficant difference in heart rate or blood pressure between volunteers' first and second MRIs, which Monster Beverage Corporation says is evidence Taurine actually helps the heart function more efficiently by improving pumping force without changes to blood pressure or heart rate. Monster calls the report misleading and alarmist, and says Dörner's conclusion that consumption of energy drinks should be restricted is not supported by the study's evidence.

US senators get tough on energy drinks