GE fruit flies could save crops 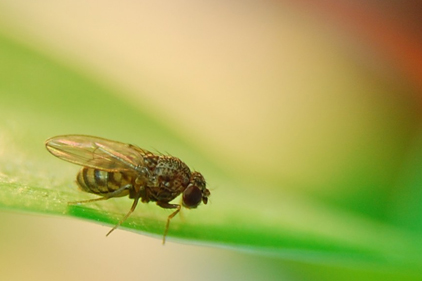 Releasing genetically engineered fruit flies into the wild could be a cheap, effective and environmentally friendly way to control pests according to new research from scientists at the University of East Anglia (UEA) and Oxitec Ltd.

According to researchers, the Mediterranean fruit fly, or medfly, is a serious agricultural pest that causes extensive damage to crops. The fly infests more than 300 types of cultivated and wild fruits, vegetables and nuts. Currently the pest is controlled through the use of insecticides, traps, biological control and releasing sterilized insects.

“Oxitec have developed a genetic approach to control medfly that is species specific and cost effective that relies on males passing on a self-limiting trait to female offspring,” researchers said. “This collaborative research study, with UEA shows that this approach is effective and once appropriate regulatory approvals are received the technology will offer growers a safe and effective route to protect their crops.”

The method works by introducing a female-specific gene into the insects so that it interrupts development before females reach a reproductive stage.

“Our research looked at whether releasing Oxitec flies, which are genetically engineered so that only male fly offspring survive, could provide a better alternative,” said Philip Leftwich, lead researcher. “The genetically engineered flies are not sterile, but they are only capable of producing male offspring after mating with local pest females - which rapidly reduces the number of crop-damaging females in the population. Using this method means that the males do not have to be sterilized by radiation before release, and we have shown they are healthier than the flies traditionally used for Sterile Insect Technique.”

The next stage of the research will be to gain approval for open-field studies. The study was funded by the Natural Environment Research Council and Oxitec Ltd.