Automated, in-line systems can spot micro pinholes or bad seals at rates of up to 200 packages per minute, improving efficiency and reducing waste

When strolling the aisles of a supermarket, consumers constantly evaluate products, often according to their packaging. People judge obvious things like uniform fill levels, straight labels, firmly closed caps, and so on. Many of these are cosmetic, but there is one evaluation point far more important: Is the package leaking? This is not always an easy thing to determine, which makes it even more critical since buyers may not realize what has happened until they get the product home, only to find it spoiled.

Leakage can be very subtle because it does not necessarily mean actual product loss. Shorter shelf life and outright spoilage can result from the specialized gas inside a package escaping, allowing it to be replaced with air. This situation is a special concern when modified atmosphere packaging (MAP) is used to maintain freshness.

One major enemy of food freshness is oxygen since it reacts readily with many common ingredients, such as fats and oils. If oxygen-bearing air can be forced out of the package and replaced with carbon dioxide, reactivity decreases drastically, and those critical ingredients retain their desirable attributes. CO2 also suppresses growth of mold and aerobic bacteria. Everything from beer to cookies to ground meat will therefore have longer shelf life and higher customer satisfaction, thanks to CO2.

Other MAP options include pure nitrogen, which can be used where packaging must be inflated, such as potato chips. Some fresh vegetables call for argon and even oxygen, although these are specialized applications. Nitrous oxide is frequently used as a propellant for aerosol products, and any leakage of this gas must be detected.

Problems emerge when a given package is not fully sealed, either because of an incomplete sealing process or a puncture in the sealing material. Over time, during shipping and while it sits on the store shelf, the filler gas bleeds out, fresh air gets in, and the product deteriorates much faster than if the MAP is intact.

Gaining a competitive advantage in today’s food and beverage marketplace begins with enhanced control of the packaging lines. Effective packaging processes translate to increased production, operational efficiency, and greater customer satisfaction. However, finding a universal method to determine if a packaging is leaking is a challenge since there are so many possible variations of trays, bags, bottles, jars, and other packages (Figure 1). Packaging lines must run as fast as possible, often up to hundreds of items per minute, so any leak detection method must be able to keep up. Each package must be inspected because the ultimate objective is identifying and extracting individual leaking packages, rather than fulfilling a statistical sampling plan.

One traditional method uses the same approach as a local auto mechanic looking for a leak in a flat tire: immersion in water to find escaping bubbles. Only selected packages are pulled from the line and inserted into a bath, so this does not provide inspection of every item. If bubbles are present, it suggests something may be wrong with the line and operators must hunt for clues to the problem. If the package does not have sufficient internal pressure to generate bubbles, a vacuum pump may be necessary to create enough differential. Sometimes this can be done with individual packages, in other cases a group may be inspected simultaneously. This test method is destructive and has obvious drawbacks such as product loss since wet packages are usually discarded, the time-consuming nature of the test, and the method of detecting bubbles, which may call for visual inspection by a human operator.

A less messy and wasteful approach puts each package, or a group of packages, into a sealed chamber and exerts a controlled vacuum on the interior. If a package is leaking, the chamber will not reach the prescribed negative pressure level. This works, but has several drawbacks:

The key challenge for a producer is to find a testing method for each individual package that provides a clear indication of seal integrity, is accurate, automated, and fast enough to keep up with high-speed packaging lines. Fortunately, there is an answer.

MAP systems typically perform the final sealing operation in a chamber flooded with the specific gas mixture, or the gas is released from the product itself, such as capping a bottle of beer while the headspace is filled with carbon dioxide-laden foam. Once the package has moved beyond the gas-flooded enclosure, the gas mixture dissipates. If the gas mixture can still be detected farther down the line, it is reasonable to assume it has seeped out of a leaking package.

One favorable factor is the ability to detect carbon dioxide using quantum cascade laser (QCL) technology. The technique uses carbon dioxide’s ability to absorb specific wavelengths of infrared (IR) light. A laser sends a beam covering a narrow range of IR wavelengths across an open space to a detector (Figure 2).

If there is attenuation of the critical wavelength greater than the overall output, it is due to the presence of carbon dioxide. The degree of attenuation can indicate the concentration. Since carbon dioxide is the most commonly used MAP gas, this becomes a very useful tool to detect leaks. A QCL detector can act very quickly, permitting 100% seal integrity checking, even at speeds up to 200 packages per minute.

Naturally the specifics of the mechanisms change based on the types of packages. A bottle of beer has internal pressure capable of pushing out carbon dioxide, but a sealed tray of ground beef might not. In such cases, the system may include a mechanism to gently squeeze the package as it passes under the hood, forcing gas through the leak. Everything must happen in about 200 milliseconds to keep up with typical production speeds.

Such a unit is self-contained with its own vacuum pump and pneumatic controls, in addition to the analyzer cell and signal processing electronics. In most applications the cabinet is connected to the rejection device where practical (Figure 4).

Figure 4: The system is self-contained and can be connected to a rejection device mounted on the conveyor. Source: Emerson

With very large packages, such as kegs or cartons, other arrangements can be enabled. System electronics operate independently, but they also send data to the larger packaging control system. For example, a run of some number of consecutive leaking packages, or a high percentage of rejects, may trigger a line shutdown and prompt operators to hunt down a common cause. An alarm stack-light can also be programmed to flash for each reject, or it can be programmed to indicate some other condition. All these functions are programmable as directed by production managers. The system electronics also perform self-diagnostics to ensure pneumatic functions, and the analyzer cell itself, are performing properly.

The operator display shows a variety of information, including normal background variation of carbon dioxide levels contrasted with the signature from a leaking package (Figure 5). The sensitivity of the analyzer cell and the speed with which it can detect carbon dioxide makes it possible to spot a hole as small as 0.2 mm in a sealed-tray package, even at a speed of 200 packages per minute. 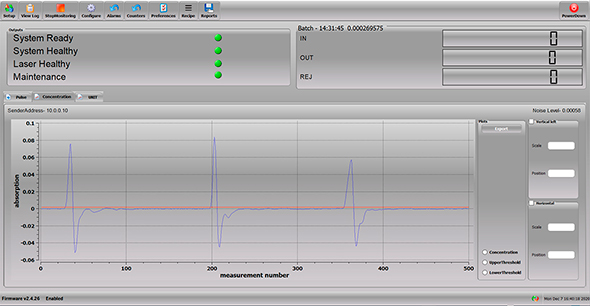 Figure 5: A leak normally registers as a brief spike of carbon dioxide, so if there is some separation on the conveyor, it is easy to identify the specific package. Source: Emerson

As mentioned earlier, carbon dioxide is not the only gas used for MAP. Since nitrogen and oxygen are major components in the atmosphere, detecting these using QCL with the required accuracy for leak detection is effectively impossible. The answer is to spike these other gases with as low as 10% carbon dioxide for tracing purposes, depending on application. This solves the detection challenge without materially affecting the protective properties. Other gases and vapors are detectable using QCL by changing the laser to one capable of transmitting at a different frequency. For example, a winery or distillery can use this method to detect ethanol escaping from bottles or barrels.

As a case in point, one of North America’s largest brewers uses this solution to ensure kegs of draft beer are fully sealed before shipment to bars and restaurants. This brewer had been using an in-line optical camera test solution but found it could not provide the required degree of accuracy. It indicated false positives and false negatives, meaning some good kegs were marked as leaking, while bad kegs went to customers.

The company has 110 keg-filling lines across its fleet of plants worldwide, so the scale of the problem was enormous. An initial installation with a Rosemount CT4215 Packaging Leak Detection System (Figure 6) proved far more accurate than the existing system, even at full line speeds. This led to immediate improvements, reducing product leakage and waste, while ensuring product quality. 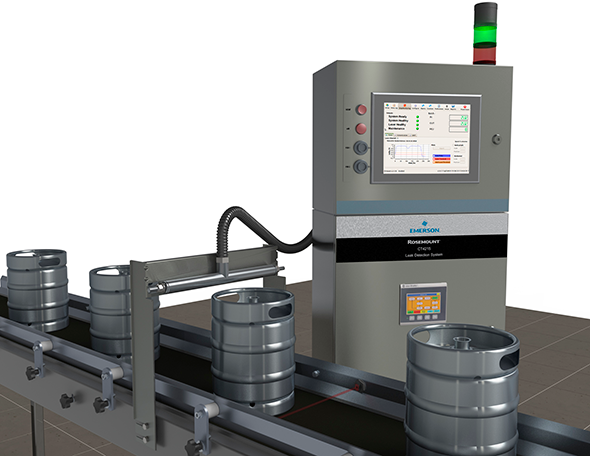 Based on the initial success, the company has been following a program to outfit all its keg lines worldwide.

The meat packing industry is one area where immersion leak testing techniques have survived for a variety of technical reasons, but primarily because companies have not found a more practical alternative. Large plants often have 30 or more packaging lines handling anything from single steaks or chops to bulk ground products. As a result, large clear immersion tanks that can be sealed with vacuum applied are used to evaluate sample packages of any size, one-at-a-time or in groups.

This requires much manual operation and time, so the rate of sampling is very low compared to total output. It increases waste as well since some of the tested packaging is scrapped. But worst, most leaking packages remain untested. They are shipped, only to be detected by a customer, resulting in complaints and returns.

One plant installed a single Rosemount CT4215 Packaging Leak Detection System as a test, performing 100% inspections on a critical packaging line, and running side-by-side with the normal manual water-tank inspection. The trial helped the company identify 1.5% of its production that would have been wasted following its traditional practices. Captured quickly and without immersion in the water tank, much of the improperly sealed packages proved recoverable. Based on plant output of 20 million pounds per year, this yielded 300,000 pounds of “free” production.

QCL leak detection provides a combination of capabilities able to deliver more reliable production and improved operational efficiency, resulting in less waste and higher customer satisfaction. The equipment itself, including the laser measurement cell, requires very little maintenance and no calibration. The laser chirping action provides the effect of a continuously operating laser but with very little actual operating time, resulting in long service life for the measurement cell. Regardless of the gas used for a MAP operation, QCL detection solves package inspection challenges.

Jason Mitchell is the global business development manager for Emerson’s detection product portfolio, with a special focus on packaging leak detection requirements in aerosol, food and beverage, and pressurized metered dose inhaler filling processes. Mitchell has a Bachelor of Science degree in business and manufacturing systems engineering, and has been with Emerson for over 10 years, most of which he’s spent working with quantum cascade laser analyzers.
You must login or register in order to post a comment.