US adults obtain about 13 percent of total caloric intake from added sugar. 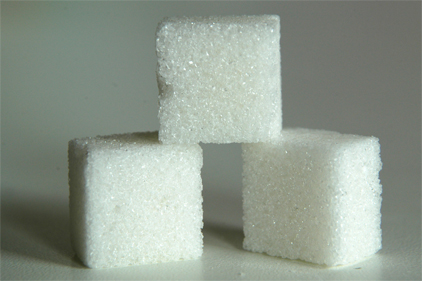 New data from the Centers for Disease Control and Prevention sheds light on the sugar consumption habits of US consumers and shows most calories from added sugar come from food items rather than beverages. However, previous studies have shown that when separated into specific food and drink categories, sodas are the leading source of sugar for adults 18-54.

The data shows children and adolescents obtain 40 percent of their added sugar from beverages, compared to adults’ 33 percent. Adults obtain about 13 percent, while children and adolescents obtain about 16 percent, of total caloric intake from added sugar. The Dietary Guidelines for Americans 2010 recommends no more than 5 to 15 percent of calories should come from solid fats and sugars.

Men consumed a larger total amount of calories from added sugars than women, but not when expressed as a percentage of total calories. Non-Hispanic black men and women obtained more calories from added sugar than non-white Hispanic white or Mexican-American men and women. Calorie consumption from sugar decreased linearly with age. Those relationships did not hold true for children and adolescents, however, as non-Hispanic white children and adolescents consumed a greater percentage of calories via added sugar than their Mexican-American peers and a similar amount to non-Hispanic black peers.

The study utilized data from the National Health and Nutrition Examination Survey, a cross-sectional survey measuring the health of the US civilian non-institutionalized population. To view the study’s results as a pdf, click here.