Demand for geographic and other information about fresh foods hasn’t decreased in a down economy. 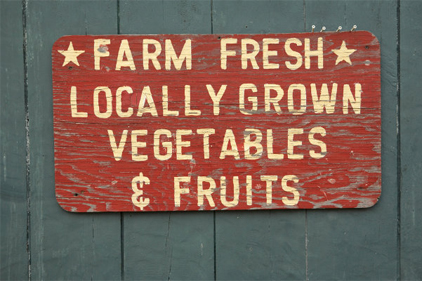 These days, many consumers turn their nose up at a fresh fruit or vegetable unless they know just where it was grown—in many cases, right down to the specific farm. Recent trends toward organic and locally grown foods, plus outbreaks of food illness caused by Salmonella and E. coli, have people asking where their food comes from, says Purdue University Agricultural Economist Maria Marshall.

And according to Agricultural Economist Jennifer Dennis, demand for geographic and other information about fresh foods hasn’t decreased in a down economy. One major—and long-time—beneficiary of the movement to buy local has been farmers markets. Marshall says she’s seen the largest growth from artisanal makers of products like jams and jellies, spices and dog food. Once a maker or product gains traction at the farmers market, it may be sold in a brick-and-mortar specialty store.

But farmers markets aren’t the only food market benefitting from organic-seeking localists. The notion of visiting a market during the few hours it’s open weekly doesn’t fit into many consumers’ on-the-go lifestyles, leaving community-supported agriculture (CSA) programs to fill the void. CSA programs allow users to sign up for a share of a farm’s yearly harvest, either delivered to the home or available to be picked up.

However, while they can alleviate some of the inconvenience of farmers markets, CSAs can present problems of their own. Consumers only receive produce that’s in season, but that can mean ending up with unfamiliar or unwanted items. The response to this problem has been the creation of food hubs.

A food hub allows users to select items from a local farm to be delivered to a central location to be picked up by the consumer. This hybrid between a farmers market and a CSA allows buyers the freedom to shop on their own time while still maintaining a close link with a fresh food’s source. Food hubs are a boon to the small farmer, who may struggle with logistics and transportation costs. Dennis says small farms that are efficient and innovative can be successful by analyzing and utilizing the appropriate distribution method for their produce, from farmers markets to CSAs and food hubs.

Small farmers may also find food hubs useful for expanding into the foodservice supply sector. A 2013 National Restaurant Association survey revealed that more than 80 percent of chefs called locally sourced meats, seafood and produce the hottest trend in food in 2013.