Improvements in nutrition top consumers’ reasons for support of biotechnology 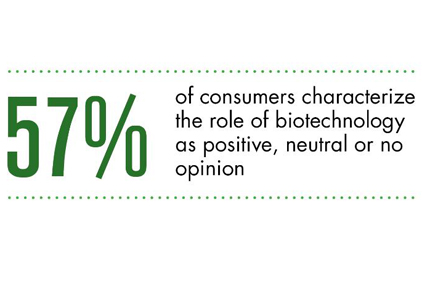 With increased interest and media coverage surrounding biotechnology and GMOs, only 2 percent of consumers cite GMOs as a barrier to eating foods or beverages, according to the 21st Annual Consumer Attitudes about Nutrition Study.

Conducted by the United Soybean Board, the study addresses topics of interest to the food industry. This year’s study included 1,000 random surveys within the US population.

The study concluded 57 percent of consumers characterize biotechnology as positive or neutral.

Among those with a positive opinion on biotechnology, improved nutrition, lower use of pesticides and improved crop yields emerged as the primary reasons for their support.