In January, we looked at a novel way of acquiring real-time data on primarily incoming water streams to control consistency of water used as a critical ingredient. This month we look at something completely different—using bacteria to clean up a wastewater stream and generate enough electricity to run the system and produce clean water. And, if you think that concept is really “out there,” had you asked the inventor of this technology—when she had started a successful career in aerospace—whether she would switch careers and create a successful down-to-earth invention like this, she would have probably said “no.”

Orianna Bretschger graduated from Northern Arizona University with a B.S. in Physics and Astronomy. She quickly found herself with a vibrant career in aerospace. But, she thought, it wasn’t really her. Bretschger left to finish a Ph.D. in Materials Science from USC, where she discovered a whole new world of microbes and electrons—a world that led her to a discovery that uses bacteria to treat high-strength wastewater. After signing on to an assistant professorship and lab researcher with the J. Craig Venter Institute, she continued her research in the field, eventually spinning the technology out into her own company, Aquacycl, to turn her research into a real-world product and service.

As CEO and founder, Bretschger has targeted the food industry—and especially high-sugar processes like soda, juice and confectionery—as potential applications of this technology. I spoke with her to learn more about her invention, how it works and what its future role in wastewater treatment could be. The system is called Bio-Electrochemical Treatment Technology, or BETT®. 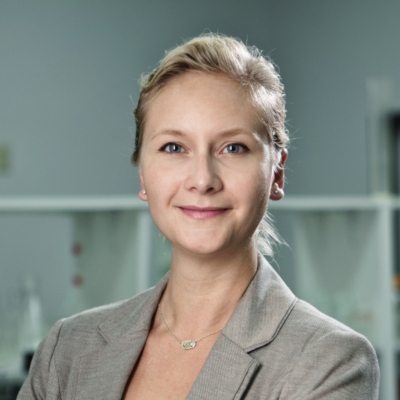 FE: Orianna, how did you ever get from physics and astronomy to microbiological studies and an invention that relies upon bacteria to clear high concentration waste streams?

Orianna Bretschger: It’s all about electrons. I’ve always been inspired by sciences, which brought me to a double major in physics and astronomy at Northern Arizona University. After graduation, I worked in aerospace, using the first CCD cameras to capture imagery for guidance systems (electrons for pictures). I learned a tremendous amount, but I knew that I wanted to pursue a career that was geared to environmental and/or human health.

I was accepted to the Ph.D. program at USC, where I met my adviser, who was studying how bacteria “breathe rocks.” I was fascinated by the electron transfer processes where bacteria naturally drive the geochemical cycle in the environment as they respire, or “breathe.” When it first got started, the field was very focused on the energy recovery aspect—waste to energy. However, the energy density from microbial respiration is really low, and I became much more interested in studying how we can control microbial metabolism (eating and breathing), by simply varying the resistors that are applied in an electrical circuit. When we move electrons away from the bacteria quickly, i.e., draw a higher electrical current, we force the bacteria to breathe faster—and when they breathe fast, they eat fast. This relationship allows us to accelerate treatment rates by simple electronic controls that can be employed remotely.

After my Ph.D., I led a lab at JCVI where I continued researching microbial communities and created the early version of Aquacycl’s BioElectrochemical Treatment Technology (BETT). In 2016, we spun out this technology to form Aquacycl and started commercializing the system.

FE: What does this invention do?

Bretschger: We do on-site wastewater treatment of the ultra-high strength streams for food and beverage processors. That is the most costly and difficult to treat. When I say ultra-high strength wastewater, I mean streams that are 1,000 times more concentrated in organic material (mostly sugar) than what you see in a typical sewer. The BETT system is based on microbial fuel cell technology and uses natural bacteria for the purpose of accelerating wastewater treatment rates, eliminating primary sludge, minimizing secondary sludge, producing electricity and making new molecular water.

FE: How does it work (at the microbiological level)?

Bretschger: Locally sourced bacteria are placed inside the reactors, where they form biofilms on the interior surfaces. The bacteria break down organic matter in the wastewater and release electrons during their natural process of respiration. The released electrons are captured as direct current and used to offset the power consumption of the system. Higher electrical currents enable faster treatment rates due to enhanced microbial respiration, resulting in treatment rates in hours instead of the days or weeks required by other processes. The generated electrical current also enables remote, real-time monitoring of system performance and offsite troubleshooting capabilities.

FE: Now that you described its basic operation, how do you execute BETT in a real world system? What does the hardware look like?

Bretschger: Each reactor is about the size of a standard car battery. They are mounted inside a 20- or 40-foot shipping container, and the systems are scaled based on three factors: influent composition (what is coming into the system), desired effluent (how clean it needs to be) and volume. Because the BETT system is modular, it provides flexibility to meet changing production demands and a small footprint.

FE: Is Aquacycl BETT a system you purchase, lease, etc.?

Bretschger: We provide wastewater treatment as a service, which allows our customers to focus on their core business, while guaranteeing peace of mind that they will maintain permit compliance. Our systems are sold as a long-term service package, which includes all the treatment technology and equipment—as well as remote monitoring and control service—and any necessary maintenance or onsite repair. By eliminating upfront capital expenditures, we can help customers save money from day one. Typically, our systems are saving customers 20-60% compared to current treatment, but this varies widely depending on how they are managing their wastewater today.

Bretschger: It depends on the streams we are treating and the discharge permit requirements. We remove up to 95% biological oxygen demand (BOD), 80% total suspended solids (TSS) and 30% total nitrogen. Most of our customers use the BETT system to treat streams that they are currently trucking away or paying high surcharges for sewer discharge. We can be used as pretreatment to an existing aerobic or anaerobic system, as the BETT system will remove most of the organics and break down the complex carbon chains to simpler volatile fatty acids. This means that if it is used with an anaerobic digester, it can increase methane generation and if used with an aerobic treatment, it can reduce sludge production and energy demand for aeration.

Since our system can treat streams that have up to 150,000 mg/L BOD, if we remove 95%, they may still need post-treatment depending on the local permit discharge levels. For example, we are working with an off-grid brewery in Joshua Tree [California] that is sitting on top of an environmentally sensitive aquifer, and they need a polishing step to meet discharge levels. In other cases, we can bring down the levels without requiring any additional treatment and they can directly discharge, reducing surcharges and/or eliminating trucking costs.

FE: What can the electrical current that is generated by the system be used for?

Bretschger: Our systems can achieve energy neutral because the electrical current generated is used to offset energy demands of the system. Any excess electricity could be used to charge a golf cart, or something relatively small, but we’ve really focused our efforts on optimizing the system for rapid treatment times and efficient BOD removal rather than electricity production.

FE: How do you control the BETT process, e.g., so that you know whether you have too much bacteria—or is that not a problem?

FE: Is the BETT system scalable? How do you determine the size required for an application?

Bretschger: The system is very scalable. The reactors stack together like LEGOs®. Because the BETT system is modular, it provides flexibility to meet changing production demands in a small footprint. If treatment demands increase, you can add more reactors, without needing to redesign the entire system or invest tens of millions of dollars. Within wastewater, it is really as plug-and-play as you can get.

FE: Do you currently have any test systems running?

Bretschger: We just installed a full-size system for a bottling plant to treat their discarded product. We also have a system at a brewery that is being installed in Q3 this year. Our longest running system has been in operation since 2016 and is treating swine waste (manure) at a pig farm. We’ve validated treatment of several other streams with on-site demonstrations of confectionery, brewery and military. In all of these cases, we’ve met or exceeded agreed treatment rates.

FE: What food/beverage applications are well suited to using this treatment? Are any currently running?

Bretschger: The best applications are going to be the high-sugar waste streams, so sugar processors, juice/beverage producers, confectionery and candy, syrups, fruit and vegetable processors, and snack foods. That being said, if a company is already concentrating and trucking, these streams could be a good fit with BETT systems because these are typically low volume, high-concentration, and expensive to manage.

FE: Are you looking for any food/beverage industry partners?

Bretschger: Yes, absolutely. We are always looking for industry partners. Within the food and beverage space, we are looking to work with companies that have goals to lead sustainable wastewater management. Most of the top tier food companies have sustainability goals that focus on corporate water stewardship. We fit very nicely here as we can help them to achieve their goals, provide cost savings, reduce energy consumption and move toward zero liquid discharge. As companies look to decrease process water use or accomplish zero liquid discharge, the effluent will actually become more difficult to treat as it becomes more concentrated. Traditional onsite treatment systems are built to handle a specific concentration and volume, and changes to this can create problems that may lead to limited production volumes.

Other partners that we are looking for include engineering firms that design wastewater treatment systems for food and beverage companies, as well as complementary technology partners.

FE: Anything else that I didn’t ask that you’d like to discuss?

Bretschger: One other challenge that we didn’t touch upon is the downstream impact of wastewater management. Wastewater is usually the last thing that companies want to think about, but it can end up causing a lot of headaches down the road for the producer and the utilities that they discharge to. In many cases, the utilities are facing aging infrastructure which was built for residential treatment and struggle to handle the increased load from food processors. We’ve talked to many companies that are facing decreased permit levels or increased surcharges which can end up limiting production expansion. By treating directly onsite, companies can help the communities that they are a part of, reduce operational costs and reduce their environmental impact.

Organic botanical biopesticides based on tea tree oil: Safe for the environment and people

Psst: Do you have an odor problem?

Psst: Do you have an odor problem?

How a Climate Control Efficiency Analysis Can Save Energy and Money