This website requires certain cookies to work and uses other cookies to help you have the best experience. By visiting this website, certain cookies have already been set, which you may delete and block. By closing this message or continuing to use our site, you agree to the use of cookies. Visit our updated privacy and cookie policy to learn more.
Home » Stable growth and demand patterns reveal room for cost optimization
Manufacturing News
TECH FLASH 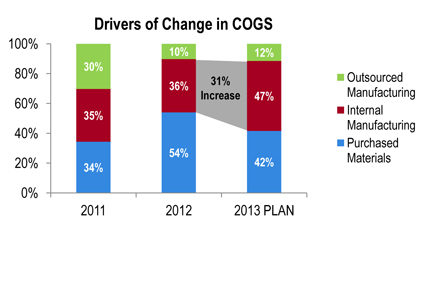 Are your company’s cost performance goals in line with those of the rest of the industry? A new cost optimization study by the Hackett Group maps typical cost optimization goals and identifies top strategies to achieve them. Hackett’s targets include all components of the cost of goods sold (COGS), including labor, manufacturing overhead and material, and take into account both prior and expected future results.

Hackett says companies should plan for continued growth in 2013, and stabilized global growth and demand patterns will allow manufacturers to focus on productivity improvement for margin growth. Revenue increased by an average of 1.6 percent in 2011 and 3.9 percent in 2012, and is predicted to increase by an additional 4.3 percent in 2013. Companies are taking advantage of this stability by sourcing more strategically, using assets more effectively and managing operations for greater efficiency.

In the US, growth has been stronger in manufacturing than other industries, due in part to favorable energy costs in the US relative to other markets. However, capacity utilization in the US remains well below recent highs. Hackett’s data shows only 31.5 percent of firms operated at or above 85 percent capacity in December 2012, compared to the 43.3 percent recorded in September 2011. That gap suggests many companies could support immediate growth with existing capacity before needing to make major investments in new capacity.

Margin growth in 2012 was far less reliant on outsourcing than it was in 2011, when 30 percent of COGS improvements were realized through outsourced manufacturing. The study expects the trend away from outsourcing to continue, as major companies have already outsourced many of the activities that can be effectively managed by third parties. On-shore and near-shore have become more attractive as stable demand reduces the need for the flexibility companies sought by outsourcing.

Companies will also seek to reduce total materials cost in 2013, continuing a trend that saw a nearly 1 percent reduction in 2012. However, 77 percent of the forecasted drop in material costs is due only to price savings from lower commodity costs or better sourcing. The remaining 22 percent of the decline in material costs came due to techniques like managing product specifications and designs to reduce material requirements, optimizing product mix to manage costs and using value engineering to extract additional savings.

In addition to reducing total material costs, companies were able to reduce internal manufacturing costs by 1.8 percent in 2012. According to Hackett, survey respondents plan an additional 1.7 percent cut in 2013, with productivity improvements continuing to represent the largest share of manufacturing cost improvements. Internal operations efficiency has benefited from aggressive plant management to remove underperforming plants, integrated business planning for more efficient resource allocation, targeted manufacturing investment of equipment and systems and the continued use of lean manufacturing techniques.