This website requires certain cookies to work and uses other cookies to help you have the best experience. By visiting this website, certain cookies have already been set, which you may delete and block. By closing this message or continuing to use our site, you agree to the use of cookies. Visit our updated privacy and cookie policy to learn more.
Home » Blue Bell expands recall after ice cream cups are linked to Listeria risk
Latest headlines 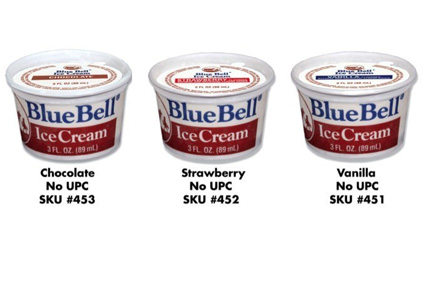 Blue Bell Ice Cream issued a recall for its 3 oz. institutional/food service ice cream cups because they have the potential to be contaminated with Listeria monocytogenes.

According to Blue Bell, on March 22, the Kansas Department of Health and Environment reported a single positive test for Listeria monocytogenes on a chocolate ice cream cup originating from a hospital in Wichita, Kansas. This cup was produced in the Broken Arrow, Oklahoma plant on April 15, 2014.

The recalled cups are chocolate, strawberry and vanilla flavors with tab lids. These products are not sold at retail establishments and no illnesses have been reported to date.

Earlier this month, Blue Bell issued the first recall in company history when an outbreak of Listeriosis was linked to ice cream products manufactured at its production facility in Brenham, Texas according to FDA.

Blue Bell says it has removed all the affected ice cream products from the market. No Mooo Bars, pints or half gallons were affected by the recall.