Bringing Apatin Brewery up to date and speed

When a brewery can no longer satisfy demand for thirsty customers, it’s time to make some big changes—and long-standing partnerships ease the upgrading task

Molson Coors subsidiary brewery, Apatinska Pivara Apatin—located in Serbia—found it was having difficulty in meeting demand for its glass bottle lines, but also saw an inexorable demand for its brews in cans. What to do? Fortunately, the brewery had already been working with KHS since the 1970s when it merged with its predecessor companies Holstein & Kappert and Seitz Enzinger Noll Maschinenbau AG (SEN), who in 1993 merged to form KHS.

The long and trusted partnership between the brewery and KHS gave Apatin a head start in the modernization process when it made conversions to two of the brewery’s glass lines and procured a KHS Innofill Can DVD can filler for a new can filling line. In the process, the glass lines were sped up considerably, and with the new can filler, the brewer benefitted from an all-around improvement in hygiene and efficiency.

Think of a friend you’ve known for 50+ years. What you know about each other makes it easy to understand each other’s needs. It’s no different with long-lasting company partnerships. “We’ve always had a really reliable partner at our side in KHS. Its personnel know not only our production site and technology inside out; they’re also familiar with our requirements and all possible challenges,” says Tanja Popović, packaging manager at Apatin Brewery.

When in 2014 the brewery decided to modernize a few of its machines—some of them almost 20 years old—it again went for sustainable systems from KHS. The mechanical engineering company first renewed two glass lines and in 2020, the brewer then invested in the Innofill Can DVD can filler. “Our old machines could no longer meet our current demands regarding product quality, performance and sustainability,” says Popović. “Together with our colleagues from KHS, we devised a sophisticated concept for modernizing our lines.”

KHS started revamping the first glass line in 2014. The primary needs ware to reduce media and electricity consumption on the bottle washer. By installing ECO carriers the KHS engineers considerably optimized the resource efficiency and economy of the system. “The machine now not only uses a lot less water and caustic and fewer additives; it also consumes less energy,” says Bojan Culibrk, KHS’ local service manager.

Just four years later, the Apatin Brewery took the next step towards sustainable production by modernizing one of its glass fillers. The KHS engineers replaced the old vacuum pump with a new ECO variant that feeds process water back into the system after treatment. “On the one hand, we’ve cut media consumption, and on the other, the filler is now more economical and more efficient,” says Culibrk. The ECO vacuum pump proved so convincing that the Apatin also procured this piece of equipment for its second glass filler.

The traditional brewery, founded in 1756, also commissioned KHS to install a new capper turret. This is a lot easier to clean than the previous model, Culibrk explains. “It lowers the risk of product contamination and as a result, hygiene is improved.” Furthermore, KHS was also able to optimize the cap quality on the glass bottles. 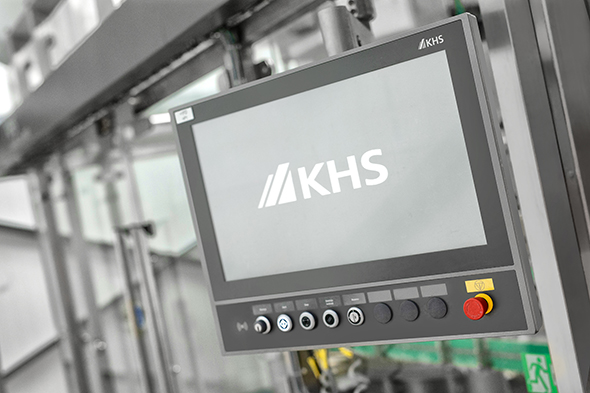 Using HMI panels makes the machine much easier to operate. All processes are now automated and many of them have been digitalized. Source: KHS Group

In addition to improved hygiene and product quality, the Serbian brewer also wanted to automate its plant technology. This has been achieved by using HMI panels integrated on the glass lines and new can filler. According to Apatin’s Popović, this makes the machine much easier for operators to use, as all sequences are automated and many of them have been digitalized. “The new programs for product changeover, sanitizing and filling speed up our processes. Using this state-of-the-art technology, we achieve a much higher level of production efficiency and avoid unplanned downtime thanks to improved safety and reliability in filling,” says Popović. The HMI system also detects wear parts in advance, meaning that replacements can be ordered in good time.

In 2020 the brewery invested in an Innofill Can DVD filler. “We had to boost our capacity in this segment in order to meet the growing demand for beverages in cans,” says Popović. “With our new filler we can process up to 25,000 0.5-liter cans an hour. We’re also more efficient and sustainable.” Do the math, and it works out to 6.94 cans per second.

According to the brewer’s own statistics, the output runs to more than two million hectoliters per annum; that’s about 52.834 billion gallons per year. The Innofill Can DVD fills all of the brewery’s brands into containers holding 0.33 and 0.5 liters, among them Jelen, Jelen Chill, Jelen Cool, Apatinsko, Staropramen, Bavaria, Nikšićko and Nikšićko Tamno. The brewery supplies the regional market, namely Serbia, Montenegro, Bosnia and Herzegovina, Croatia, Northern Macedonia and Slovenia. Popović is not ruling out expansion, however. “With its high capacity and efficiency, the new filler provides ideal conditions for this.” 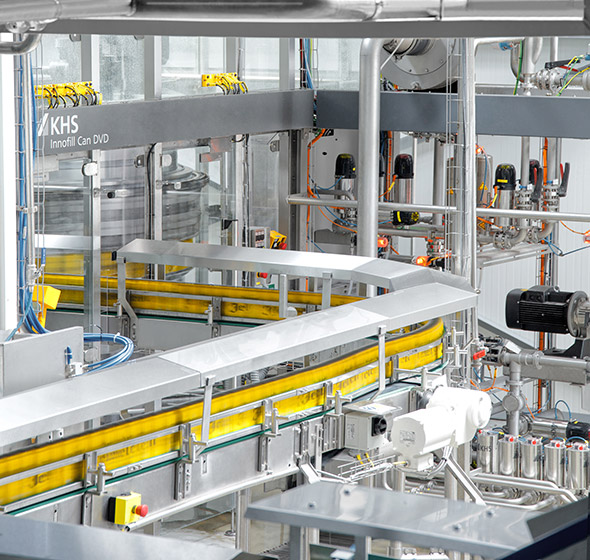 In 2020 Apatin Brewery invested in the Innofill Can DVD can filler from KHS. Source KHS Group

Besides the high throughput, hygiene and product quality also played a key role when making the new investment. The Innofill Can DVD permits warm filling of beverages at around 20°C (68°F). This method becomes more significant, particularly regarding the further processing stages as it practically eliminates the formation of condensation. This more or less rules out the risk of cartons, trays and cans in six packs growing soggy, forming mold or being contaminated by microbes.

The brewery is also convinced that the new CO2 purging process has an equally positive impact on the product quality, as Culibrk comments. “Oxygen pickup impairs the quality of the beverage. In order to prevent this, in modern production containers are purged with CO2.” The KHS purging process is so efficient that less oxygen enters the containers compared to using conventional methods—despite lower amounts of carbon dioxide being used. Moreover, the volumetric filling principle also improves the filling accuracy.

Installation despite restrictions caused by the COVID-19 pandemic

The can filler was installed during the COVID-19 pandemic and under the restrictions imposed by this. “Thanks to our local presence in Serbia and the Balkans, we were able to carry out all work quickly and efficiently,” says Culibrk. “Travel restrictions and social distancing of course presented us with a challenge or two during the course of our day-to-day activities. However, together with the customer we managed to bring the project to a successful close within the given schedule.”

Popović also draws a positive conclusion. “The dedication and commitment shown by the KHS team have left a lasting impression on us. We were always able to rely on them and their expertise.” This is why KHS will continue to be first choice for Apatin Brewery when it comes to expanding production or procuring new technologies.

Wayne Labs has more than 30 years of editorial experience in industrial automation. He served as senior technical editor for I&CS/Control Solutions magazine for 18 years where he covered software, control system hardware and sensors/transmitters. Labs ran his own consulting business and contributed feature articles to Electronic Design, Control, Control Design, Industrial Networking and Food Engineering magazines. Before joining Food Engineering, he served as a senior technical editor for Omega Engineering Inc. Labs also worked in wireless systems and served as a field engineer for GE’s Mobile Communications Division and as a systems engineer for Bucks County Emergency Services. In addition to writing technical feature articles, Wayne covers FE’s Engineering R&D section.
You must login or register in order to post a comment.