Not to be confused with UHT and HTST pasteurization techniques, MST combines the effects of a temperature spike with a drop in pressure to accomplish pasteurization in milliseconds 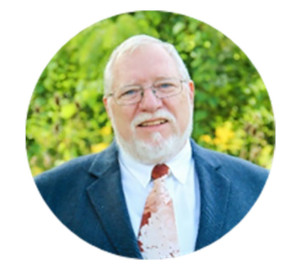 It was only a couple of months ago or so that we featured in this column a novel shear technology, which because of the nature of the process, just happened to provide a degree of sterilization as well. But, suppose you want a process to pasteurize milk without shearing it—while keeping the flavors in and killing any bugs along the way, extending the shelf life beyond ordinary pasteurization.

Bridging the gap between HTST (standard method) and ESL while maintaining nutritional value, MST is an add-on to the HTST process. Philip Frechette, who has worked in the food and dairy industry since 1966 when he graduated from Valparaiso Technical Institute as an electronic engineer, is the primary developer of the MST process and is chief technical officer of its namesake, Millisecond Technologies Corp.

Frechette founded JCS Process and Control Systems (JCS) in 1988 as a NY “C” Corporation. His career started as a controls engineer for the Lindy Division of Union Carbide Corp; then as a computer systems engineer for the Foxboro Company; followed by several stints with Alfa Laval companies in senior management positions. As the founder and CEO of JCS, Frechette has pioneered many advanced technologies and systems for the food, dairy and beverage industries during the past 55 years.

I spoke with Frechette to find out how the MST process works, where it fits the dairy industry, and what its benefits are. For those who are interested, FE presented a Webinar on this topic recently, and you can replay it at this address.

FE: Philip, Whew, the acronyms associated with pasteurizing milk seem more complicated than computer terminology. To be sure we get started on the right foot, could you simply describe HTST, HHST, ESL, UHT and MST—and how they relate to one another?

Philip Frechette: HTST (High Temperature Short Time) is the pasteurization method for normal fresh product. It elevates the temperature of milk to above 161°F (typically processed between 165°F and 175°F) and holds that temperature in a hold tube for 15 seconds, to kill pathogens, and microorganisms that can render the milk spoiled. However, it does not kill the heat-resistant spore formers, which is why the milk processed in this method typically goes bad in less than 30 days.

HHST (Higher Heat Shorter Time) is often referred to as an ultra pasteurizer. This pasteurization method elevates the temperature of the milk above 281°F (typically processed between 288°F and 295°F) and holds that temperature in a hold tube for 2 seconds, to kill pathogens and spore formers, which is why the milk will last for 60 to 120 days in packaging that has been sterilized before filling, but not hermetically sealed. This method applies to refrigerated Extended Shelf Life (ESL) product and is a Pasteurized Milk Ordinance (PMO) term.

ESL (Extended Shelf Life) is a term—not a process. It simply means the product has been processed in such a manor as to allow the milk to last beyond 30 days, typically 60 to 120 days, in refrigerated conditions.

MST (Millisecond Technology) is a method of enhancing the HTST process to cause the spore formers to lag their normal time of going into a vegetive state (the state where they can reproduce bacteria and cause product spoilage). This is an add-on to the HTST pasteurizer, placed after the raw regenerator, homogenizer and before the heater section of the HTST. This method will allow the HTST to produce milk that will last beyond 50 days in refrigerated conditions. 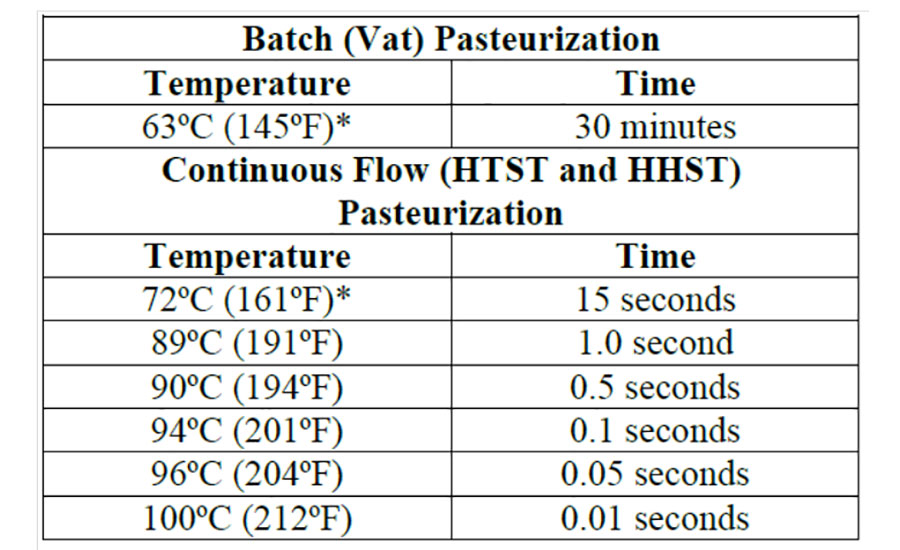 FE: What are the time/temperature specifications for HTST, ESL and the combined HTST+MST processes?

Frechette: The following chart shows the PMO defined time and temperature for the various methods of pasteurizing milk.

The chart below shows the typical operating parameters of the HTST with and without MST. As can be seen from this chart there is no added thermal stress placed on the milk in either case. The MST acts like an extension of the heater section, such that the temperature rise from the exit of the regenerator to the inlet of the hold tube is identical in both cases. 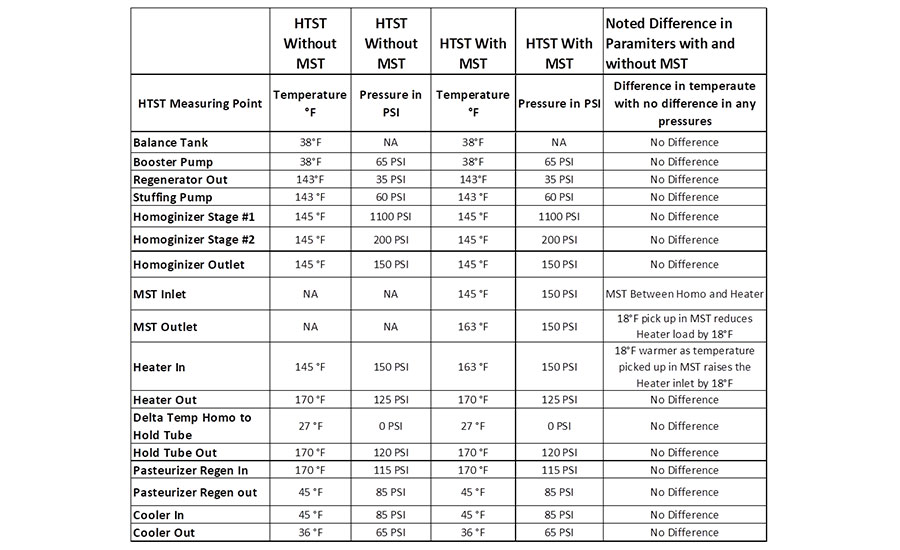 FE: So I think I understand, MST isn’t used alone in the process. It’s an add-on to HTST, right?

Frechette: Yes, at this point in time that is correct. It will require modifications to the PMO to allow MST to be a standalone pasteurization method, and we plan to present this in the 2022 NCIMS (National Convention of Interstate Milk Shippers), which is where proposed changes to the ordinance are presented and ruled on by the committees and general assembly of the IMS community.


FE: Briefly describe how MST works, and how it complements the HTST process? Why would a dairy processor want to add this technology?

Frechette: MST takes the milk from the discharge of the homogenizer, utilizing that as the motive force to feed the MST process. The milk is feed through special designed nozzles that form droplets of milk in the range of 30 to 100 microns. The droplets undergo a pressure drop when being formed, which is felt on the microorganism’s cell structure. The microdroplets in essence greatly increase the surface area of the milk that is exposed to the heat in the MST chamber (heat generated by the jackets of the vessel by means of circulated hot water).

The chamber being at a higher temperature than the incoming milk, coupled with the fact that the milk droplets give a large surface area, and the velocity of travel through the heat at 90 feet per second, gives a rapid thermal rise in milliseconds, and thus kills the bacteria, and causes the spore formers to go into a lag state, which can last as long as 120 days and as short as 50, depending on the spore itself. Since this process operates at lower temperature and the normal pressures of HTST, the thermal efficiency is then equal. This process has no effect on the natural matrix of fresh milk. For those reasons the dairy processors can enjoy a longer date code on their fresh milk products.

“The integration of MST into an existing HTST requires cutting of one pipe and adding two elbows to direct the milk to the MST.”


FE: You have decades of experience with dairy processes. How did you come to invent MST? How long has it taken to bring this invention to the real world?

Frechette: The discovery of MST technology was by second generation Russian scientists, who developed it from tabletop lab scale to pilot plant scale but had difficulty to bring it to longer than twenty minute runs, and to commercial flow rates. MSTC, the owner of the technology, contacted JCS Process and Control Systems, and asked if we could help them to bring it to the commercial level.

We worked on the different chamber designs, different nozzle designs, and implemented several of these by integrating them into the base HTST that MSTC had as a pilot plant. We moved the system to the Purdue University Food Science Center, where I worked with Professor Dr. Bruce Applegate Ph.D. and his staff, challenging the technology with many different microorganisms, and modifying the design to accomplish what we now have. We then scaled the system up and now can produce systems from 0.5 GPM to 200 GPM. This took around ten years to accomplish.


FE: The name of the technology, Millisecond Technology, is the same as the company, correct? So who owns the patents to this technology?

Frechette: You are correct; the technology and company name are the same. Millisecond Technologies Corp, a Delaware USA Corp, is the owner of the MST technology. 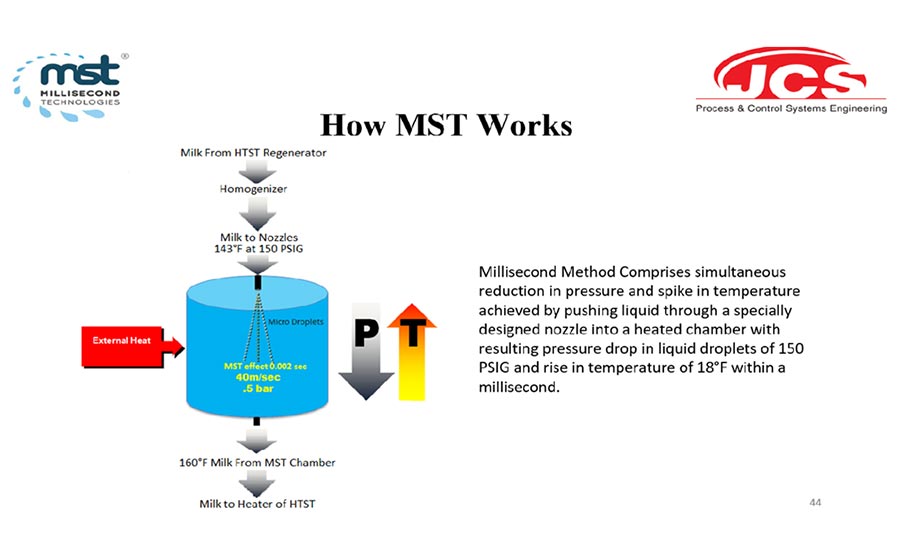 Frechette: The product is excellent; the dairy started with a date code of 30 days, and now are producing “Long Life Fresh® Milks” date coded at 45 days with 10 days after opening. While white milk in their market declined by 10% during the COVID-19 lockdown, the MST milk increased in sales by 58.5%.


FE: How long does it take a dairy facility to add this process to an existing pasteurization line?

Frechette: The integration of MST into an existing HTST requires cutting of one pipe and adding two elbows to direct the milk to the MST. Therefore, the cutover can be executed and commissioned during one down day. This is usually on a Sunday or Wednesday.


FE: Can this technology be used with other products such as juices? If so, what beverages/juices and how would you apply it?

Frechette: We have run many different liquid products on the MST at Purdue, including whole milk, skim milk, chocolate milk, apple juice, orange juice, hemp juice, coconut water and food additives. MSTC, has in addition to these, also challenged the technology with wine mass, and other forms of dairy product. MSTC has also formed a pharmaceutical group in Moscow which has successfully challenged the technology on blood plasma, and has shown it effective in killing Polio Virus, Hepatitis A&B, HIV, and other virus. 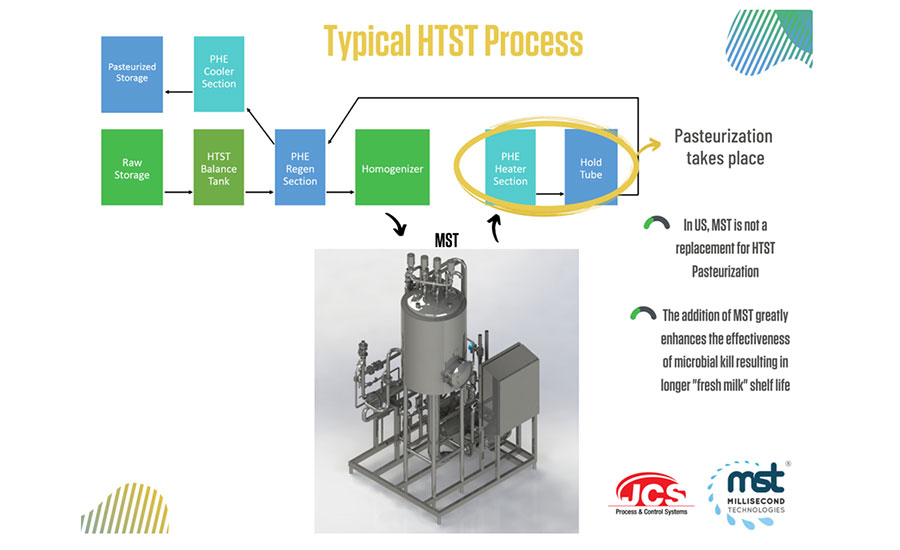 MST can add shelf life to milk through an add-on process. Source: Millisecond Technologies Corp. (Click on image to enlarge.)

FE: This technology is available now, right? Who makes it?

Frechette: The technology is now available. JCS Process and Control Systems has the exclusive manufacturing rights to the technology, as well as the engineering services to integrate it into new or existing HTSTs. MSTC is the owner of the IP (intellectual property) and currently offers Licenses to operate the technology.


FE: How is JCS related to Millisecond Technologies?

Frechette: JCS as stated, is the exclusive producer of the technology. There is no formal partnership, and no stock is owned in each other by the other.


FE: Are you looking for any kind of partnerships?

Frechette: We are looking for food-industry competent companies to represent MSTC in markets where fresh refrigerated products are embraced.

Frechette: They can visit either the MSTC Web Site or the JCS Web Site. There are links between the two, and Blogs and info on both, and a link to retrieve the information.