Processing 7,000 tons of nuts annually from its British Retail Consortium A-grade and RSPO certified facility, Trigon Snacks supplies a wide range of nuts and snacks to the licensed trade, retailers and food service operators. Marketed under its own brands as well as retailer private labels, the company commissioned a highly sensitive conveyor-style metal detection concept to ensure compliance with global retailer and regulatory standards for its new honey roasted nuts line.

Stringent retailer COPs specified the line as “naked nuts,” so the new honey-coated range needed to be inspected for metal contaminants prior to own-label packaging. Additionally, Trigon required a supermarket spec metal detector that was sensitive enough to adapt to the fine oil and sugar tolerances and meet the regulatory requirements of every geographical market they are sold in.

For logistical reasons, a small-footprint, wide-head Fortress Stealth metal detector engineered to inspect the fried, dried and seasoned nuts on a conveyor before entering the chute and falling into the one-ton sacks, was the most viable and accessible option.

Reject on a Roller

Factoring in the conveying and reject system was critical to guarantee reliable operation and avoid false readings. Given the tight footprint, a customized solution was the best way to ensure that metal detector performance was not compromised.

The low profile nuts combined with the inspection speed meant that a kicker would be incompatible. It is also virtually impossible to isolate and divert contaminated products with naked products. With insufficient space to accommodate a flap style reject, Fortress instead engineered a clever and efficient retracting band conveyor and reject mechanism.

The metal detector, which sits at the front of the conveyor, calculates precisely how long any contaminated nuts will take to reach the end of the conveyor band, communicating via the metal detector control system. The belt then smoothly retracts back on a sliding rail rolling the rejected nuts into the dedicated bin located beneath the conveyor, resuming its inspection position in just seconds. 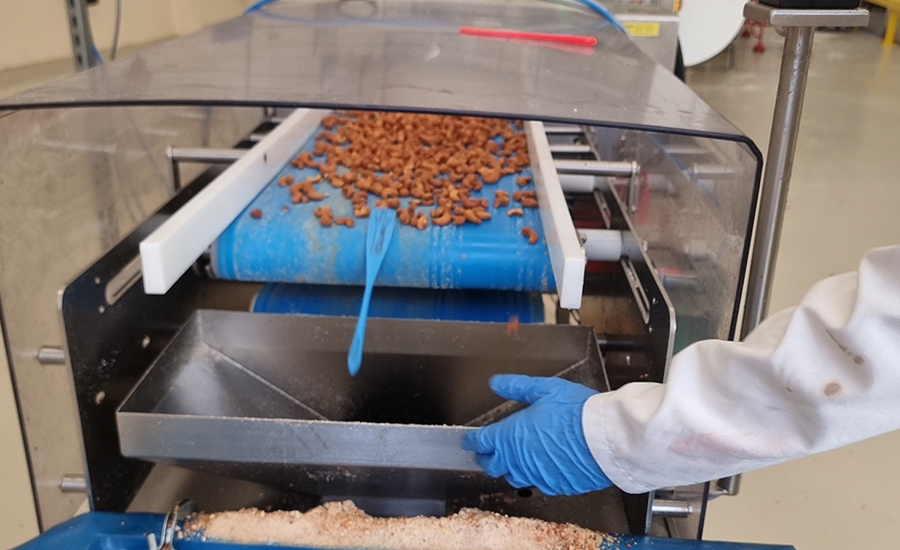 To-date, Trigon reports zero false rejects on its new honey roasted nut line, upholding the company’s longstanding sustainable, ethical and traceable principles. Despite admitting he was slightly apprehensive by the compact dimensions of the entire system, Grieve says that it has already proved itself to be a reliable and easy to use machine.

Hourly manual tests are the only reported source of daily waste. The lead engineer estimates this to be less than 0.05% of the total production, well below the food manufacturing average which on some lines can reach double figures.

Affirming the importance of customizing the aperture, Eric Garr, North America regional sales manager, says, “Aperture size is critical to optimal operation. Customizing the aperture around the product being inspected is one way to ensure the metal detector will perform to optimal levels. Additionally, integrating a conveyor system, fully assembled and checked, is another failsafe way of making sure a producers’ stringent sensitivity requirements are not compromised.”