Challenges like working with cannabis oil have beverage developers looking for equipment solutions.

When it comes to traditional food and beverage production, processors work to establish standardized processes and procedures that wouldn’t have to vary much if an ingredient, such as olive oil, was switched to a different supplier.

Developing legal cannabis edibles and beverages, however, is a different story. And the cannabis ingredients central to production often present a number of challenges—particularly for beverage processing.

At lower potency levels, says Jay Denniston, director of science, Dixie Brands, Denver, cannabis oils act much like other oils, such as olive oil or a similar option typical to food and beverage production. But as potency increases, the cannabis oil becomes stickier, with a much lower viscosity, and it starts to act more like molasses.

Ari Cohen, vice president of operations, Dixie Brands, says that the stickier cannabis oil presents a number of challenges for processors. “What that does is gunk up the works, for lack of a better term,” he says. “Any types of equipment with hosing, tubing, anything like that, a little bit of that THC builds up on plastic parts, and metal parts, and that requires deeper cleaning.”

Add in regulatory challenges—including regulations that are constantly changing—and finding the right equipment can be a serious headache. But as the market grows, more equipment suppliers are entering the fray. Existing equipment can also be adapted, but that approach comes with its own set of challenges. To put it simply, producing cannabis food and beverages requires a lot of up-front work to get right.

Because of cannabis’s unique qualities and relatively small market share, Michael Devlin, president, DB3, Seattle, says off-the-shelf solutions are few and far between—particularly when it comes to handling cannabis oils. “There are very few suppliers of equipment who can say ‘we’ve got this.’ The equipment’s out there—it’s just being sold by food processing companies, pharmaceutical companies or nutraceutical companies that have designed equipment to process other essential oils. The key is being selective and finding those right suppliers and equipment to match the process for whatever the cannabis operator is looking for.”

If a beverage is meant to imitate the feel of soda or beer, then it can be filled with a system such as a gravity filler machine. The beverage is pumped into a holding tank, then pneumatic valves fill each container to the specified point. Smaller gravity fillers, such as four-head models, can be used for artisanal or craft products where operators are more heavily involved in the production process. 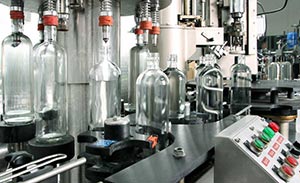 But as cannabis beverage producers scale up and start producing more mass-produced products, semi-automated or fully automated fillers offer consistent, efficient production during larger production runs. Bottle management and filling can be completely automated and tied into production controls, eliminating the need for an operator to replace bottles.

Regardless of the type of filler needed for the specific application, cannabis oil’s properties require paying close attention to cleaning between production runs. The oil’s stickiness can cause it to build up on machine parts. In addition to just making a mess, it can affect the potency of a batch of product. If 10 percent of the oil sticks to the machines, then that can lower the potency of a batch. If all of that oil isn’t cleaned off before the next batch, then it can increase the potency of that batch if it works its way into the product instead of remaining stuck on the machinery.

Another challenge is that many manufacturers don’t make cannabis-specific equipment yet for this market—or have reluctance to enter into the cannabis market.

“It’s changing now,” says Cohen, “but a lot of companies I reach out to, they don’t want to deal with a cannabis company. Sometimes you’ll reach out to a company about something, and they’ll do one of three things: they will help you, they won’t help you or they’ll help you and overcharge you.” Some equipment suppliers viewing the cannabis market as flush with cash, he notes, so they quote a much-higher price than they would to a traditional food and beverage manufacturer.

When cannabis product producers do find a potential equipment supplier, such as a bottling equipment manufacturer, that’s willing to work with them, there’s another challenge that presents itself. Producers will want to test equipment before purchasing it to be sure that it will work for the application they have in mind, but cannabis can’t be shipped across state lines. So if a producer in Colorado wants to buy equipment from a company in New Jersey, the producer can’t ship a test product containing cannabis oil. Dixie Brands notes that it gets around this by using hemp oil for testing purposes.

Cannabis producers also face challenges on the front end, when it comes to ensuring that a potential ingredient supplier is offering a cannabis oil that has been properly refined, says Denniston. As previously mentioned, cannabis acts differently at different potency levels, so there can be a big difference in its properties depending on how potent it is. If you need 70 percent cannabis oil to work in your fillers, then 50 or 60 percent oil isn’t going to work.

Cannabis products are still a relatively small part of the overall food and beverage market, but they’re growing rapidly. As with any product, moving from a small-batch, hand-crafted product to large production runs and consistent, repeatable quality means processors place different demands on their production equipment.

But there’s a catch for cannabis producers when it comes to increasing distribution. A brewer of regular beer in St. Louis can ship its product around the country. A cannabis producer in Colorado can’t, because cannabis products can’t be shipped across state lines, even if the products are going from one state where cannabis is legal to another.

“Every state has to have a manufacturing plant,” says Devlin. Trying to have the consistencies, efficiencies and quality attributes that come with a true professional manufacturing operation, he notes, and trying to shift away from the mentality of some craft operations where products vary somewhat from batch to batch to batch, can cause growing pains. Repeating the same exact process in every state where products are sold creates a new set of challenges.

Even if a company developing legal medical or recreational cannabis beverages starts to produce at a larger scale, with automated machinery and controls, it can sometimes be difficult to find production equipment that works at a scale large enough to justify the cost, but small enough to fit a market that’s growing, but not yet huge.

Devlin notes that sometimes the equipment is readily available, but that the scale of production is so great that the investment doesn’t make sense. “You would run the line one day a month to meet a state’s demand.”

So the industry is feeling a strong need for a greater variety of production equipment to meet the needs of medium-scale—but professional-level—efficiency.

Because cannabis is such a new market and equipment manufacturers are not yet fully involved in it, cannabis producers have to deal with a number of challenges when it comes to specifying and operating equipment.

Whether it’s figuring out ways to test equipment without being able to ship cannabis oil across state lines, extra cleaning required to deal with cannabis oil’s stickiness or trying to find equipment that can be operated to meet both current demand and be scaled up to meet future demand, cannabis producers have to do a lot of extra legwork to move from small-scale, hands-on operations to automated production.

On top of all of that, there’s still much that producers don’t even know about cannabis and its exact properties, says Cohen. “THC, while it’s been around forever, people know very little about it, including the scientists. We’re constantly learning, on an almost daily basis, what we can and can’t do with it. What we know will fill a matchbox, and what we don’t will fill a warehouse.”