This website requires certain cookies to work and uses other cookies to help you have the best experience. By visiting this website, certain cookies have already been set, which you may delete and block. By closing this message or continuing to use our site, you agree to the use of cookies. Visit our updated privacy and cookie policy to learn more.
Home » The 2021 Top 100 Food and Beverage Companies
InnovationTop 100 Food & Beverage Companies
2021 Top 100, Exclusively Sponsored by CRB 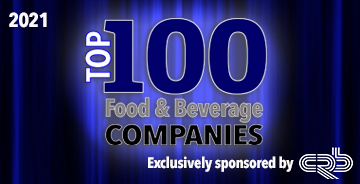 Nestlé made a number of moves in its food divisions in 2020, including completing its divestment of its U.S. ice cream business to Froneri; selling its 60% stake in Herta to create a joint venture with Casa Tarradellas; and selling its Yinlu peanut milk and canned rice porridge business.

“I am proud that we were able to achieve these results whilst: 1) staying focused on the issues that matter most to society, and 2) continuing to invest in the business to increase capacity, build better systems and drive better ways to run our supply chain—capabilities aimed not only at accelerating our long-term growth, but also creating smiles for our many stakeholders,” says PepsiCo Chairman and CEO Ramon L. Laguarta. 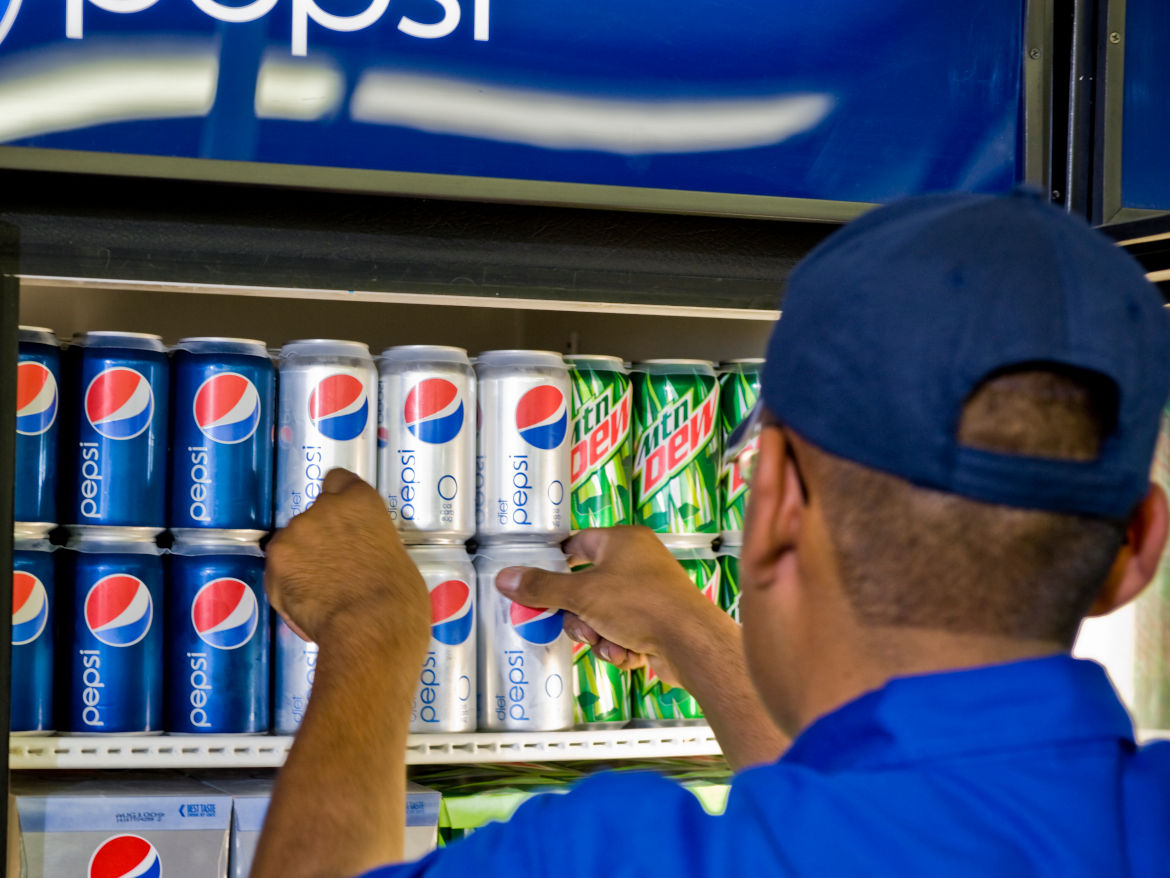 After several years as No. 2, PepsiCo took over the top spot in the Top 100 ranking. Photos courtesy of PepsiCo.

While the headline is the change at the top, 2020 was a year that sent shockwaves through food and beverage companies throughout the Top 100—and beyond. Supply chain challenges, surges in consumer demand, drop-offs in foodservice demand and worker safety concerns shaped the industry as a whole—and the effects are still being seen today. Here’s a closer look at the 2021 Food Engineering Top 100 food and beverage companies and how 2020 affected the industry.

The change at the top wasn’t the only movement in this year’s top 10. Four other companies moved within the rankings as well. JBS and Anheuser-Busch InBev switched places, with JBS moving up one spot to No. 3 and AB InBev moving down to No. 4. Archer Daniels Midland Company moved up to No. 7 to replace the Coca-Cola Company, which moved down to No. 8.

AB InBev was heavily impacted by the COVID-19 pandemic, with volumes decreasing by 5.7% and revenue declining 3.7%. But a bright spot for the company was beer growth rebounding in the second half of 2020, as consumers purchased beer through both retail and e-commerce channels. AB InBev’s BEES B2B platform and its Zé Delivery platform for consumers both performed well, with BEES seeing two-thirds of its revenue in the 4th quarter of the year.

“We are now more closely connected than ever to the 6 million+ customers and 2 billion+ consumers we serve worldwide through our clear commercial strategy, our revamped innovation process, digital platforms and our ongoing operational excellence,” says AB InBev CEO Carlos Brito.

As for JBS, the company saw strong growth across its divisions, with revenue for its Pilgrim’s Pride brand increasing by 38.3% and JBS USA Pork growing by 37.1%. Overall, the company saw revenue increase by 32.1%, as consumers stocked up on its protein products for meals at home during a time when dining out was, at best, a limited option.

“Our business model of diversification in both our portfolio and geographic presence in 13 countries, turned out to be the right strategic choice,” says JBS CEO Gilberto Tomazoni. “We showed agility and flexibility in adapting to new consumer habits.”

Archer Daniels Midland saw its food revenue grow by about $2.5 billion, to almost $35.4 billion. The company’s food revenue is about 55% of its total revenue; the only company in the top 10 with a smaller percentage of food revenue is No. 9 Cargill, for which food makes up about 28% of its revenue.

Coca-Cola saw its revenue decrease, from about $37 billion to about $34 billion. The company streamlined its portfolio and saw strong growth in the second half of the year, especially among its flagship Coca-Cola brand, its fairlife milk brand and some of its bottled water brands.

In his annual letter to shareholders, chairman and CEO James Quincey summed up what the food and beverage industry has faced over the last year-and-a-half.

“Historians of the future will decide how the events of 2020 reshaped the world,” Quincey wrote. “I already know this—the year of the pandemic has changed our business and our industry in ways that will endure. We’ve learned much in the last year, and it will help us continue to change for the better.”

The past two winners of Food Engineering’s Plant of the Year award—Keurig Dr Pepper and The JM Smucker Company—came in at Nos. 34 ($11.6 billion) and 54 ($8 billion) respectively. Both companies have spent significant amounts of money on new plants and other infrastructure investments over the past few years, with construction continuing even during the pandemic.

Keurig Dr Pepper saw a 4.5% increase in sales across its portfolio of more than 125 brands, which includes Snapple, Green Mountain Coffee Roasters and Mott’s in addition to its namesake brands. Leading the way was the company’s packaged beverages division, which saw a sales increase of 8.5%. The company also saw 3 million new households join its Keurig userbase, bringing it up to about 57% of American households in total.

Keurig Dr Pepper also took significant steps to advance its sustainability efforts, making all of its K-Cup pods recyclable, as well as converting its Core Hydration water bottles and 100% recycled PET plastic and undertaking the same goal for its 16-ounce Snapple bottles.

In addition, says chairman and CEO Bob Gamgort, “We stepped up our commitment to eliminate packaging waste and are the proud co-founders of two industry coalitions investing to advance a circular economy.”

The JM Smucker Company was seeing huge demand for its Uncrustables line even before the pandemic hit, and opened up a production facility in Longmont, Colo. in 2020 to meet the growth in the market. The company saw double-digit growth in each quarter for the frozen sandwiches, and saw revenue increase overall as well. The company’s pet food brands were also strong performers, as its Meow Mix and Milk-Bone brands continued to grow.


The growth of dairy

There were several categories that performed well in this year’s rankings, including dairy. In addition to fairlife showing a strong performance for Coca-Cola, both Lactalis (No. 15, $22.8 billion) and Dairy Farmers of America (No. 21, $17.8 billion) saw significant growth in revenue.

Lactalis is the largest dairy products company in the world, with brands such as Parmalat and Stoneyfield Farm in its portfolio. The company’s revenue increased by about $2 billion compared to the prior year.

Dairy Farmers of America completed its acquisition of much of Dean Foods, which helped the company see growth despite a significant decline in milk prices in the United States. The company also saw about $2 billion in revenue growth.

Energy drinks were another category of significant growth for companies on the Top 100. Red Bull (No. 64, $7.2 billion) saw sales grow by almost 6%, and moved up five spots in the rankings.

Monster Beverage Corporation, which made its debut on the Top 100 last year, moved up six spots to No. 87, with revenue of almost $4.6 billion. The company reported growth for the 28th year in a row. Its flagship Monster Energy brand is now sold in 141 countries and territories, but chairman and co-CEO Rodney Sacks says the company is not content to rely only on its main product for future growth.

“In 2020, we launched a number of new beverages in the United States, as well as in our international markets,” says Sacks. “Despite the COVID-19 pandemic during 2020, we have been able to accelerate our innovation pipeline and plan on launching new and exciting beverages during 2021.”

Some other highlights of the 2021 Food Engineering Top 100 list include:

An ending and a beginning

How COVID-19 is continuing to disrupt supply chains