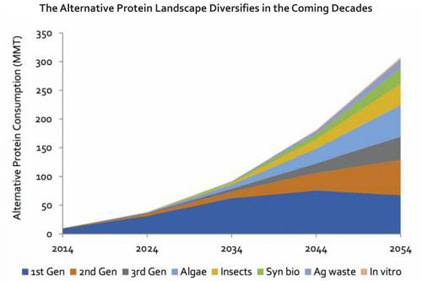 The growth in alternative protein sources could potentially claim up to a third of the protein market by 2054, according to emerging technology and intelligence analyst Lux Research.

Researchers say that with the global protein consumption reaching 943 million metric tons (MMT) by 2054, rising at a 1.7 percent compound annual growth rate from the current 473 MMT, alternative proteins will pick up the slack of a slowing meat and seafood growth.

“Novel protein sources beyond meat and fish are finding opportunities for growth within the once static protein industry,” said Camilla Stice, Lux Research analyst and the lead author of the report titled, “WhooPea: Plant Sources Are Changing the Protein Landscape.”

“Consumer preference, concerns over the planet’s ability to produce sufficient meat, impact of livestock agriculture on the environment, and mounting scientific advances are driving the changing protein demand,” she added.

Researchers studied factors that will affect supply and demand of protein and evaluated the influence of some emerging alternative protein sources.

Among the results, researchers found:

Approximately 430 million hectares of cropland worldwide will be used to grow the crops that will feed this growing protein demand by 2024. “This will constitute nearly 100 million additional hectares of protein crops growing worldwide. Rice and canola will be the fastest growing protein crops in terms of acreage planted. While human soy consumption will increase significantly, much of this will come from a shift away from feeding soy to livestock as opposed to a change in agricultural plantings.”