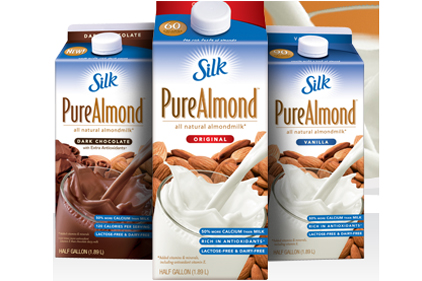 Almond milk and other dairy alternatives are consistently being stocked in household refrigerators nationwide. As a result the US beverage market has shifted to favor these alternatives, according to Dairy and Dairy Alternative Beverage Trends in the US, a new report by market researcher Packaged Facts.

According to Packaged Facts estimates, US retail sales for dairy and dairy alternative beverages reached $24 billion in 2014, representing a 4 percent increase from 2013. While sales increased for both segments, the past few years have seen the dairy alternative sector increasing its share of the overall market to now account for 20 percent of the industry up from barely 14 percent in 2010.

Packaged Facts said the biggest trend in the segment has been strong growth in almond milk. From 2013 to 2014 dollar sales of almond milk increase 40 percent on unit and volume increase just slightly below that figure. Sales of coconut milk also increased by double digits.

However, traditional dairy producers plan on making a resurgence in 2015 by re-establishing and embracing milk as an innovative product. Coca-Cola has already started down this path with the introduction of its new Fairlife “super milk.” But the best bet for milk’s comeback according to Packaged Facts is in organic products.

"The growing market for organic milk is a reflection of the overall increase in sales of organic products and the steady widening of the numbers of American consumers willing to pay a premium price for the guaranteed quality of an organic product," says Sprinkle.