Long-running steam generators give a gourmet confectioner the impetus to purchase another to expand plant output.

Old World values blended with an appreciation of the best technology has been the perfect recipe for Marich Premium Chocolates of Hollister, CA. Since 1983, the confectioner has created gourmet chocolates under its brand, private labels and contract manufacturing, using only the best ingredients and proprietary processes. The company has gained fame for its creativity, as well. “We always work hard to create new, unique flavors,” says Troy van Dam, co-owner with his brother Brad. An example is Marich’s natural Coconut Curry Cashew, a roasted cashew surrounded by white chocolate and blended with curry spice, sea salt and coconut. While it’s one of the more edgy products in the Marich line, the customer responses have been incredible.

Since the company’s establishment, Marinus van Dam, the brothers’ father, expanded the business as much as he could in Watsonville, CA, but after running out of 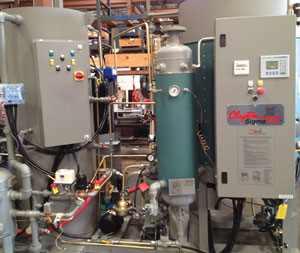 space, he moved it to Hollister in 1998. To ensure the highest-quality products and meet the growing demand, the chocolatier needs equipment that is reliable, efficient and guarantees a consistent result. About 29 years ago, the van Dams needed two new boilers for cooking and sanitation purposes. They looked to Clayton Industries.

Marinus van Dam’s previous candy-making experience with Goelitz manufacturing, a California confectioner, and the Clayton steam generators it had onsite impressed him. He opted for Clayton Industries high-efficiency EG-33 steam generator to start up his facility in Watsonville. As the new venture took off, the confectioner added a skid-mounted Clayton EG-100 complete boiler package to augment the facility’s capacity. Due to the skid mounting and small footprint, it was easy to move both units over to the manufacturer’s expanded, upgraded facility in Hollister. According to Troy van Dam, the choice was simple: “Our Clayton steam generators provide us with consistent steam distributed throughout our plant for multiple purposes, including cooking and sanitation. Over the years, they have been extremely reliable, especially considering the hours we run them.”

Troy van Dam sums up the pluses of the steam generators:

• Fuel costs are lower because the steam generators use less energy for the same output as a conventional boiler.

• Startups reach full output in five to 10 minutes. The units do not need to be left idling during non-use periods. Being able to stop and start the steam generators as needed saves fuel and adds to operational convenience.

• The needed steam flow can be obtained momentarily, so equipment can be turned on and off when needed, leading to productivity increases. Varying quantities and types of candy can be processed quickly and easily.

Steam boilers save time and money for ingredient processor