The Government Accountability Office says there is insufficient data to verify the quality or safety of food these programs could deliver.

The Government Accountability Office (GAO) recently found issues with USDA’s FSIS pilot programs for proposed meat and poultry inspection protocols, stating there was insufficient data to verify the quality or safety of food these programs could deliver. Meanwhile, other media sources claim the pilot programs fail to stop contaminated meat from entering the supply chain.

The USDA’s proposed inspection protocols would cut down on the number of federally required inspectors, replacing them with processor or third-party inspectors. These pilot programs come at a time when processors are increasing line speeds, requiring more trained inspectors to keep up with production. 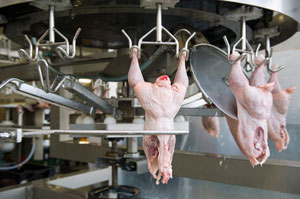 Over the years, USDA inspectors have provided continuous inspection of each meat and poultry carcass and its parts that enter interstate commerce. In 1998, USDA began three pilot projects at slaughter plants for chickens, turkeys and hogs, with the purpose of deploying inspection resources more effectively in accordance with food safety and other consumer protection requirements, according to the GAO report, More Disclosure and Data Needed to Clarify Impact of Changes to Poultry and Hog Inspections (GAO-13-775).

The intention of removing USDA/FSIS inspectors from slaughter lines is to free the inspectors to perform additional food safety and quality checks in the areas of greatest risk, as needed and throughout the plant. However, one USDA inspector would remain at the end of each line. Under the pilot projects, plant-appointed personnel sort carcasses before USDA’s inspection at the end of the line. In 2011, USDA completed a report evaluating the pilot project at 20 young chicken plants, concluding the inspection system used at the pilot plant rivaled the food safety and quality at any plant not participating in the study. In January 2012, USDA published a proposed rule to modernize poultry slaughter inspections based in part on its pilot projects.

However, the previously mentioned GAO report says USDA didn’t thoroughly evaluate the performance of each pilot project, which ran for 10 years or more. According to GAO, the evaluation was sketchy in that “snapshots of data for two two-year periods were used instead of data for the duration of the pilot project, which has been going on for more than a decade.” Samples taken varied from year to year, and the number of plants included in the analysis each year was unclear according to USDA’s FSIS data.

The GAO identified weaknesses including that training of plant personnel assuming sorting responsibilities on the slaughter line isn’t required or standardized, and that faster line speeds under the pilot projects raise concerns about food and worker safety.

According to the GAO report, a difference between the pilot projects and the optional new poultry inspection system is that the new system would eliminate FSIS’s performance standards for food quality defects and replace them with a requirement that plants maintain records documenting their products meet the regulatory definition of “ready-to-cook.” Ready-to-cook products are free of defects such as feathers, oil glands and diseases.

According to an article entitled, “USDA pilot program fails to stop contaminated meat” in the September 8 edition of the Washington Post, one of the worst offenders in the country for health and safety violations was a participant in the USDA program. At this plant, government inspectors spotted carcasses with fecal matter at the end of the line. Fortunately, the carcasses didn’t get out the door.

The article also points to an example of a Canadian beef-processing plant (XL Foods) that it says used the new inspection system protocols. Last fall, the plant had to recall close to 9 million pounds of beef and beef products tainted with E. coli—of which, about 2.5 million pounds were destined for the US market. Canadian government safety inspectors said faster line speeds were partly to blame for the contamination, according to the article.

According to a report, Independent Review of XL Foods Inc. Beef Recall 2012, from a panel convened by the Government of Canada, many issues led to the contaminated beef including: too few people on staff, inadequate training, failure to meet responsibilities of food safety programs by both workers and CFIA (Canadian Food Inspection Agency) staff, lack of trend analyses data on high periods of E. coli contamination, directives to keep the line running at all costs and not stopping the line during high event periods of E. coli positive tests to determine a root cause analysis.

Automation and food processing today: It's about labor

Operations under a microscope