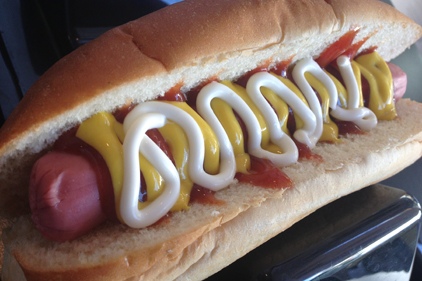 The hot dog, while beloved by many Americans as a summer and grill staple, is often rebuffed for high fat content. But there may be hope for low-fat alternatives which have been criticized for textural differences, as new research on hot dogs made with olive oil rather than pork fat is showing progress.

Researchers said hot dog consumers expect a certain amount of chewiness and springiness in their product, which is something that is missing from low-fat hot dog options. This texture is often produced by adding large amounts of pork back fat.

To get the same effect, but build a healthier hot dog, researchers developed olive oil “bulking agents” to replace the saturated animal fat in the product. The substitutes were 55 percent olive oil and could reduce calories by more than a third.

Researchers used Raman spectroscopy to explore factors important to texture. This process probed the protein and lipid structures of the hot dogs to figure out how they affect texture and tested how they held up during refrigeration. The study found that regardless of ingredients, all the franks, including those made with pork fat, responded similarly to cold conditions for nearly three months.

The full report on the research can be found here.